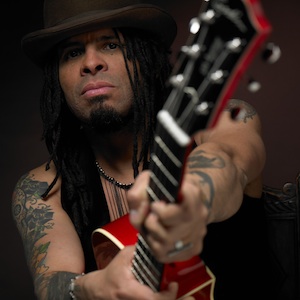 A virtuoso of the six-string, Eric McFadden has been amazing audiences internationally for years. His command of so many genres is accentuated with meticulously crafted songs that span numerous genres. Eric is a veteran of such celebrated west coast bands as Liar, Alien Lovestock, Angry Babies, IZM, Holy smokes, EMT, Stockholm Syndrome, Faraway Brothers, and the Eric McFadden Experience. McFadden has recorded several independently produced solo and band albums, many of which are regarded as underground masterworks by fans and critics alike. On his 1996 solo debut “Who’s Laughing Now,” McFadden unleashed his macabre carnival gypsy-voodoo blues and Spanish-inflected rock sensibilities on an unsuspecting public. In the years since, Eric has recorded and released several albums on such labels as Terminus (Atlanta), Fortune (San Francisco), Bad Reputation (Paris), Response (USA) and phYne Entertainment (USA).

For over 3 years, Eric toured the world as mandolinist/guitarist with Funk legend George Clinton & Parliament/Funkadelic and continues to collaborate with Clinton on outside projects. He spent a year and a half touring the world with Eric Burdon & The Animals, and recently finished recording on Burdon’s new record.