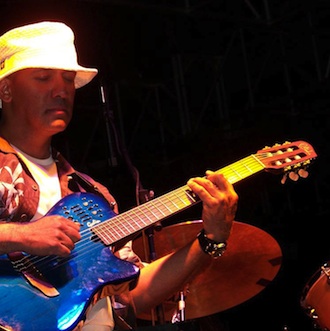 Jerome received his first guitar from his mother when he was eleven years old. His father encouraged him to play by enticing him with songs by the great guitarist Wes Montgomery. But everything changed when he heard Jimi Hendrix. That experience prompted the beginning of many years of self-study that ultimately resulted in Jerome’s ability to play and read music fluently. With no formal training, except a brief instruction with guitarist Earl Klugh, Jerome moved on to teach students of his own at M Studio in Detroit.

Jerome’s tribute to Hendrix was broadcast live on WDET-FM on September 16, 1977. The broadcast led to his introduction to George Clinton and the Parliament Funkadelic.

In 1997, he left Detroit, against the advice of family and friends, and headed west for Las Vegas. Jerome knew he had a gift for playing and he wanted to share it with the world. He stepped out on faith, and has never regretted it.

Being new to Las Vegas, and knowing no one, Jerome took his guitar and a few business cards to a local jazz club to sit in. Upon hearing him play, local musicians were in awe. It seems that’s all it took, because from that point on, the phone constantly rang and Jerome was sought after by numerous bands that heard about “the new guitarist in town.”

Jerome performed in several R&B bands and acted as musical director in others. But, the quest was on to form a jazz band. When his twin brother, Jimmy, moved to Vegas in 2002, they formed the Brothers Ali.

Jerome also has a gift as a songwriter and arranger. George Clinton and the Parliament Funkadelic’s song “She’s Crazy,” dedicated to the late Jimi Hendrix, was written and produced by Jerome, as were many other songs that appear on the Warner Bros. and Casablanca label under George Clinton’s ~P. is the Funk~ c.d. series.

Jerome has recorded with numerous artists in Los Angeles and Detroit over the years including: George Clinton, Racy Biggs, sax master Tim Cunningham, and members of Stevie Wonders’ Band. He has also had the privilege of entertaining Aretha Franklin at her birthday bash.