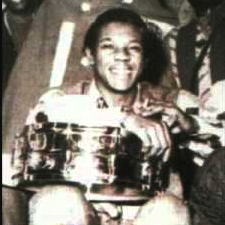 Tiki Fulwood was the housedrummer in Philadelphia’s Uptwown Theater in 1968 when he was noticed by Funkadelic bass player Billy “Bass” Nelson. He, together with Eddie Hazel, arranged a gig for Tiki with Funkadelic, which was unbeknown to George Clinton until he started playing during a Funkadelic set. That resulted in the leaving of the then-Funkadelic drummer Stacey.

Tiki played drums on Funkadelic’s first recording, “Good Old Music,” and was invited, along with Eddie Hazel and Billy Nelson, by John Daniels to come play at his club Maverick Flats in Los Angeles. They played there for two weeks and every gig resulted in a packed house.

Tiki left Funkadelic in 1969, however, to become the drummer in soul singer Tyrone Davis’ band. He played on two of his hit records, “Can I Change My Mind” and “Turn Back The Hands Of Time”, though he was soon persuaded by Billy to rejoin Funkadelic in late ’69, which now also included Tawl Ross on guitar and Mickey Atkins on organ.

Tiki played an important role on Funkadelic’s first LP, Funkadelic, most notably on the loud “I’ll Bet You”. However, only after two more albums, Free Your Mind and Your Ass Will Follow and Maggot Brain, Tiki was fired from Funkadelic due to his drug abuse and resulting incompetence.

Sadly, Tiki lost his mother in 1971 and his father in 1972. Both died of stomach cancer, which made Tiki say to Billy at his father’s burial that he was the next to go.

In 1973, Tiki was asked to come back to Funkadelic once again, this time by Eddie Hazel. He made a great comeback with “Nappy Dugout” from the group’s Cosmic Slopalbum. In 1974 he was part of another super Funkadelic LP, Standing On the Verge of Getting It On. But in 1975, after one more LP for Funkadelic, he was fired again. Rumor goes that he had grabbed Clinton and threw him up against the wall, demanding to get paid.

Incidentally, Tiki’s drumming on Parliament’s “Tear the Roof Off the Sucker (Give Up the Funk)” from ’75 was edited and replaced by drumming from new P-Funk drummer Jerome Brailey. Ironic fact is that Tiki had confronted Jerome back in 1970 when Brailey sat in for him during a Tyrone Davis’ gig, which Tiki missed, resulting in Tiki pointing a gun at Jerome, saying he was trying to take his job.

Although Tiki was fired in 1975 from Funkadelic, he still was part of some of P-Funk’s activities. He played drums on several 70s P-Funk tracks which were left unreleased until 1990s reissues brought them to light. These include Funkadelic’s “Clone Communicado” from 1976, and the Brides of Funkenstein’s “Take My Love” and “Rat Kissed the Cat.” And he even made an appearance on Parliament’s Live Earth Tour album.

In 1978, he had plans of starting his own band called TIKI. But after he fell during a football game and was brought to the hospital, he was diagnosed with cancer. Tiki decided to stay inside and just die. But longtime friend Billy “Bass” Nelson convinced Tiki to play drums again, so he did, until he passed away on October 29, 1979 of stomach cancer.