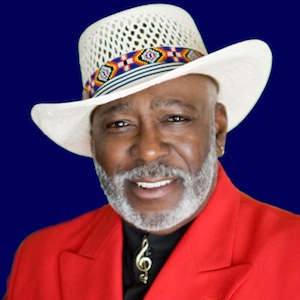 Sidney A. Barnes, Jr. was born in Welch, West Virginia in 1941. His parents, Ellen and Sidney Barnes, Sr. loved their only child with a passion. Both parents were creative and hard-working. Mom, a very religious woman, sang in the church choir, taught school and was a part-time beautician. She also formed the church’s Junior Choir and put together school plays in which Sidney was always involved. Dad had a knack for drawing and woodcarving, and worked as a truck driver, coal miner, auto mechanic and welder, in order to feed and care for his small family.

Sidney grew up in Roanoke, Virginia, listening to and learning to appreciate Country/Western and Bluegrass as well as Gospel music. When Sidney began to think seriously about a musical career, there was no such thing as Rock n’ Roll, only Rhythm ‘n’ Blues, Pop and Do-Wop. But after Elvis and Allen Freed, that all changed, and a young Sidney Barnes began his long journey into the dark and exciting world of show business. After forming several vocal groups in Junior High and High School (while living in Washington, D.C.) with school mates including a young Marvin Gaye, Van McCoy and Herb Feimster (of “Peaches and Herb” fame), Sidney felt ready for the big time. In order to increase his chances of success, the Barnes family moved to Newark, New Jersey ­ as close to New York city as they wanted to be.
In no time at all, he was knocking on doors, and singing for anyone who would listen to him. He was led to a fledgling New Jersey record label called Gemini Records, where he recorded his very first record called “Wait My Love”. The record was a modest local hit, but, at that time, Sidney felt more comfortable as a member of a group, rather than a solo artist. He formed a group called “The Serenaders” with friend and neighbour George Kerr. The group played at local nightclubs and talent shows around the New jersey area, and landed a recording contract with Riverside records. Their only release on Riverside was a song called “Adios My Love”. But soon Riverside folded, and the Serenaders were once again looking for that big break.

That big break came in 1962. Sidney heard through the music grapevine that Berry Gordy was opening a branch office of Motown records and Jobete Music in New York. Sidney, always the leader, was knocking on the new Motown office door just as the desk and furniture was arriving. After auditioning for Berry Gordy, the Serenaders were signed to a contract and flown to Detroit. There they found themselves in the now legendary Detroit Hitsville recording Studio, with many of the early Motown stars. To make a long story short ­ Sidney and George Kerr became head songwriters, producers and talent scouts for Gordy’s New York office. This office was headed by Gordy’s wife, Ray, a beautiful, sweet and wonderful woman who changed Sidney’s life with her coaching, encouragement and kindness. After helping to build up the Jobete music catalogue, he helped to bring in an old friend and New Jersey resident George Clinton and his singing group, Parliaments ­ a do-wop vocal group at the time.
Sidney and George Kerr split from Motown and each other in 1964. Sidney then teamed up with piano player and songwriter, J.J. Jackson. The two began writing freelance for several R&B solo artists of that period, including Saundra Philips and Billy Prophet. The Soul Sisters, and Inez & Charlie Fox were also just a few of the several acts that had chart records written by Barnes and Jackson. Sidney and J.J. had a short stint as staff writers for Juggy Murray’s Sue Records, one of the first black-owned record labels based in New York at that time.

Then the pair was signed exclusively to Leiber & Stoller’s fledgling Red Bird Records and Trio Music Publishing. Leiber and Stoller were famous for co-writing hits like “Hound Dog”, “Yak Katy Yak”, “Charlie Brown”, “Jailhouse Rock” and countless other Rock n’ Roll classics. Sidney and J.J. wrote chart hits for the Shangri-Las and other Red Bird artists. In 1965, Sidney recorded a song for Red Bird, which he co-wrote with J.J, entitled “I Hurt On The Other Side”. This record also features J.J. Jackson’s first-ever efforts as an arranger. The pair followed the success of that session with others like “You’ll Always Be In Style” and “I Don’t Know Why”. All are now considered classics.
After touring for a short time as one of the Fiestas (of “So Fine” fame), Sidney signed as a solo artist for Herb Abramson’s Festival records. Abramson was one of the original founders of Atlantic Records. He is also credited with discovering Ray Charles and other legendary stars. By then, Sidney and J.J. Jackson had split. J.J. went on to write and record his big hit, “But It’s Alright”. Herb Abramson became Sidney’s musical godfather and had Sidney appear on several recording sessions as writer, singer, musician and producer. While on Herb’s label, Sidney wrote and produced for a girls’ group called the Flirtations, on a song called “Stronger Than Her Love”. He also wrote and produced “Talkin’ ‘Bout A Shindig” and “New York City” for himself. These songs received much local and regional airplay.

In 1966, Sidney joined his old buddy George Clinton in Detroit to form a production company called Geo-Si-Mik with Mike Terry (famous Motown sax player). Working exclusively for Golden World Records, the team co-produced records on several acts, including J.J. Barnes, Edwin Starr, Darrell banks, the Holidays, Pat Lewis, Theresa Lindsay and Parliaments. After a dispute with Motown, Golden World Records closed its doors. Sidney and George Clinton parted ways, but not before laying the groundwork for what would later become Parliament/Funkadelic.
Under the name Johnny Goode, Sidney recorded a song entitled “Payback” for LaBaron Taylor’s Detroit-based label, Groovesville Records. When the riots of the 60’s erupted in Detroit, Sidney fled to Chicago where he joined legendary Chess Records. As a singer, songwriter and producer, he immediately began working with and writing songs for Ramsey Lewis, The Dells, Bo Diddley, Muddy Waters and others. Soon Sidney was helping to form a musical rock group called Rotary Connection, which featured Sidney and the late, great Minnie Riperton as co-lead vocalists. From 1967-1970 the group recorded five classic albums for Chess, and acquired a small cult following. Rotary disbanded in 1971. Minnie went on to pursue a solo recording career. Sidney stayed in Chicago and kept active doing radio and TV commercial jingles for some of Chicago’s major advertising agencies. During this time Sid also started working with Maurice White, helping to map out the musical concept for what would later become Earth, Wind and Fire. When Maurice asked Sidney to become the lead singer of the group, Sidney declined, forcing Maurice into the lead singer’s position. The rest is history.

During that period, Sidney was also assisting a young Chaka Khan and an up-and-coming R’n’B singer named Donny Hathaway to develop their musical skills. By the mid-seventies, Sid was touring as a back-up vocalist with Minnie Riperton, who by then was having some success as a solo artist. It was during that period, while appearing at the Riviera Hotel with the Smothers Brothers, that Minnie first informed Sidney that she had cancer. Three years later she was gone.
Following a trip to Los Angeles with Gene (Duke of Earl) Chandler on a production assignment for A&M Records, Sidney decided to move there and try his luck in the Hollywood recording community. Upon moving to L.A., Sidney discovered that the business had changed. Getting studio work was not as easy as it was years before in New York and Detroit. However, Sidney did eventually hook up with some of his old Midwest and East Coast friends, who hired him on several recording sessions for records and commercials.

Sidney moved back to Chicago and spent time working with Jerry Butler’s Songwriters’ Workshop, only to get a call from Maurice White that lured him back to L.A. Sidney assisted with background vocals on Deniece Williams’ first solo album for Columbia records. Maurice was producing the album, which included Deniece’s first hit single “Free”. From there, Sidney was off to Detroit again to assist George Clinton in laying vocal tracks for George’s multi-platinum selling album entitled “Mothership Connection”. Upon returning to Los Angeles, Sidney started work on his first solo album for Parachute/Casablanca Records. Unfortunately, the album was released but not promoted.
While recording his solo album, Sidney met a French producer, Simon Soussan, who hired Sidney to write and sing lead on a Disco project called “Arpeggio”. The song was “Love and Desire, and became a Disco favourite worldwide, scoring high on the Pop, R&B, and Disco charts. During that time, Sidney also worked with music arrangers Joel and Jerry Goldsmith, recording a song for the soundtrack of a Walt Disney movie called “Secrets of the Lost World”. He also performed a song on the soundtrack for the movie “Love at First Bite”. Next, it was a short but exciting tour as back-up vocalist for Deniece Williams on a Lou Rawls Budweiser tour.

On this tour, Sidney recreated the voice of Johnny Mathis on the Deniece Williams/Johnny Mathis hit, “Too Much, Too Little, Too Late”. Sidney received rave reviews for his performances. Sidney moved back to Chicago in 1992, and semi-retired, writing songs and doing demo sessions for various local producers.
In 1999, Sidney received a call from friends and contacts in England informing him of the popularity of some of his songs recorded in the 60’s. Songs like “I Hurt On The Other Side”, “You’ll Always Be In Style”, “Stronger Than Her Love”, “What Can I Do?” and other Sidney Barnes originals have become major club favourites among England’s Northern Soul fans.