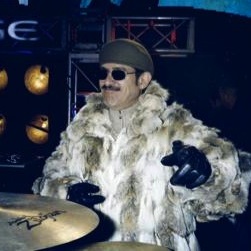 LARRY FRATANGELO, percussionist, has recorded and toured with some of the top recording artists in the world today. His name appears on Gold, Platinum and Grammy award-winning albums. Larry has performed at the White House and for the British House of Parliament. He has performed with the Boston Pops, at the Grammy Awards, the Rock and Roll Hall of Fame Induction Ceremonies, on the David Letterman Show and Saturday Night Live. A graduate of Michigan State University, Larry is currently producing several World Music projects under his record label, BAP Records.
Larry Talks About the ‘One Nation Band’
The engine of the One Nation (Under a Groove) Band, I believe, is improvisation. This definitely has its roots in jazz. All the band members are percussionists, which always reminds me of Dizzy’s (Gillespie) statement that jazz started with a man beating a drum. With the concept that Funk is the improvisational form of pop(ular) music today (not so long ago, jazz was considered pop music), the band’s musical spirit really is jazz. The ONB travels this mysterious path of modern jazz, pioneered by the most popular jazz group of all time — Weather Report. As we know, Weather Report was a melting pot of World Music, blending “miles” of musical styles from across the globe. They used jazz as their recipe to fire the brew.
The One Nation Band’s repertoire embraces this concept, including WR tunes, originals, as well as classical jazz standards, which are used as vehicles for this musical exploration and celebration. This has always been the case in the history and spirit of our American art form — Jazz. As Jazz is a mélange of cultures and musical styles, so is the One Nation Band. All with Detroit roots, all still living here, and using that experience to create the music that we play. The music that we play is the spirit of Detroit!