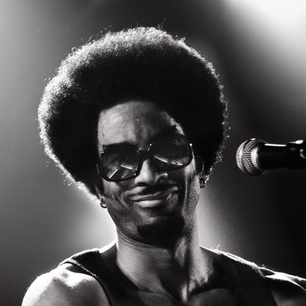 After learning piano as a child, Fiddler studied music at Oakland and Wayne State Universities, and with the jazz great Harold McKinney. He joined a do-wop outfit, The Enchantments, as a teen, and then in 1983 received his big break when a friend, Bernie Worrell the Parliament/Funkadelic keyboardist passed a tape of his playing to George Clinton. Bernie was leaving the mothership, and Amp ended up replacing him, touring with Clinton and the P-Funk mob for more than a decade. He signed with Elektra and released an album with his brother, Mr. Fiddler, in 1990, but the record proved too eclectic for the label to work out how to sell.

Amp’s low profile through the 1990s can be put down to both raising a son, and a remarkable talent for landing background work on important records. He was asked to sit in on a session for a demo after an acquaintance spotting him walking down a New York street, and when the artist Maxwell was signed, Amp ended up helping him make his acclaimed Urban Hang Suite debut.

His first solo album “Waltz of a Ghettofly” set an impressive benchmark for Amp’s future music to match. With Afrostrut he showed how to follow up with a cult classic, replacing some of Ghettofly’s looser jam-based compositions with tighter, more traditional song forms, and as a consequence his lyrics, which had tended towards the universal but unspecific, became more solidified. “I’m always happy with the songs I write, regardless of what anybody thinks,” he emphasizes, “But I guess we all have something we have to grow towards, and there ‘s always areas for learning. WE all have to do better at something.

That kind of humility is rare in today’s me-first celebrity-lust culture, but Afrostrut prove that being honest with yourself as an artist can reap massive dividends. Writing mainly at the piano rather than the Ghettofly approach of assembling sounds piecemeal from different jams and ideas-generation sessions gave Amp a tighter focus.

Leaving Pias Records in 2007 after the label merged with Wall of Sound, Amp’s next project as a collaborative album with Jamaican reggae pioneers Sly and Robbie in 2008. The project “Inspiration Information” was series of tracks brought together through the creative process in the studio without the usual A and R constraints.

“This was one of my favourite and most challenging projects to date. Two records 12 tracks from start to finish in 3 days was challenge enough. I have revered the production work of Sly and Robbie for years with numerous artists but particularly Grace Jones, so this was an amazing opportunity to jam on this level with world class musicians and create an entire album concept”. Despite the projects stellar lineup, Strut Records failed to market the album to the extend of the preceding albums and only the hard core fans really got an opportunity to hear this once in a lifetime collaboration.

Following on from Inspiration Information, Amp commenced writing for his third solo album. Tragedy struck in May 2009, when Amp’s only son Dorian Anthony Fiddler was suddenly struck down at 18 years old from diabetes and plans were put on hold for the album. As he dealt with his loss, he returned to the album project, with a strong desire to keep a very live element to the recording process, to keep the memory of Dorian alive. Dorian was a talented young drummer and graduate from Detroit Contemporary Arts, his driving ambition to one day be the heartbeat of his father’s band.

With his diverse and abstract relationship with music, the cosmos and everything, Amp’s love of electronica remained strong and the culmination of these forces has led to not one, but a two album project that highlights Amp’s talents in all arenas.

The soon to be released Ampidelic World (2012) has the innocence and rawness of Ghettofly twisted and woven around the smoothness of Afrostrut. This Psychedelic offering balances Amp’s alternative leanings with his soulful appeal, and with the majority of the tracks being recorded live, it demonstrates Amp’s impeccable talents as musician, arranger and writer to its highest level. Following on it’s heels will be Amp’s “Digitarian” project – his electronic journey through the cosmos, looking at the fine intertwined relationship between the Universe and Mother Earth.