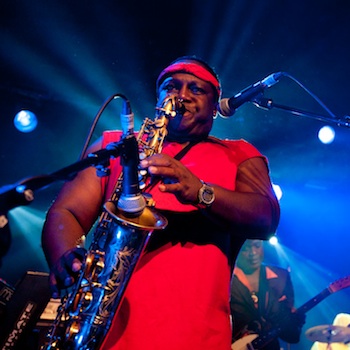 Greg is a musician whose talent is deeply rooted in African American culture. Throughout the years he has learned how to perform all types of music from R & B to Hip Hop, Acid Jazz to Blues to Gospel, Traditional Jazz, Rock‐n‐Roll to Polkas. However Jazz‐Funk is where his true loves lies. Greg began playing music at the early age of five, and his music talents are diverse. Greg performs a variety of instruments: Saxophones, Alto, Soprano, Tenor, Clarinet, Flute, Oboe, Bass, Guitar, Piano and Drums.

He is also a Producer, Arranger, Vocalist, Songwriter, Composer and Conductor. Currently Greg is performing and recording with George Clinton and the P‐Funk All‐Stars whom he has been with for many years. He also performs with Raphael Saadiq. He has also performed with other great artist such as Bootsy Collins, Maceo Parker, Fred Wesley, Stanley Clark, Dr. Dre, The Gap Band, Cameo, Snoop Dogg, Stephanie Mills, Mtume, The Spinners, Lou Rawls, Patra, Peter Wolf, Crystal Waters, Chuck Brown and the Soul Searchers, Evelyn King, Too Short, Ike Turner, Al Green, Howard Hewitt, Glen Jones, Phil Perry and various other artist. Greg performs extensively in the United States and Canada as well as other counties such as Australia, Austria, Japan, Spain, Switzerland, Finland, France, Poland, Germany, England, Italy and Holland.

Greg television and video credits include in 2009 with George Clinton and the P‐Funk, The Monique Show, David Letterman Show, Carson Daily Show, and the Tonight Show with Jay Leno with Raphael Saadiq, Dancing with the Stars, the Bravo A list Awards Show, The Elton John Oscar After Party, The Ellen Degeneres Show, The Jay Leno and the Jimmy Kimmel Show.

Greg has performed on numerous George Clinton videos and movies P.C.U. Has performed on Soul Train, New York Undercover, The Arsenio Hall Show, The Rock and Roll Hall of Fame Show on H.B.O. Greg was filmed in the Hot selling DVD George Clinton and Parliament Funkadelic “Live at Montreux” in 2004 where he was a featured perfomer. Greg is a musician who puts plenty of energy and feeling into his performances. He is currently working on a solo project to be released this year.