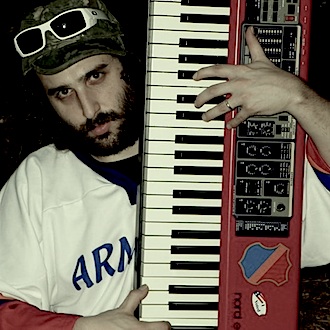 Daniel Peter Bedrosian was born in Lawrence, Massachusetts, the third child of concert
level classical pianists Peter & Jeanne Bedrosian. His parents were both music majors,
graduating at the top of their class in the music department at the University of
Massachusetts, Lowell. Moving into Education, they started their own Piano School,
and, like any loving musical tradition, enrolled their three children into the program,
eldest Holly at 4 years of age, Elise at 3 years, and the youngest Danny at 4 years. All
three of the children were classically trained by their parents, and were also involved
in Church Choir, their father being the Choir Director at the local church.

Danny’s first of many Classical Concert Recitals took place at the age of five, the very
same year winning the bronze medal in his first Musical Theory and Performance
Competition, beating many fellow pianists double his age. Three years, and half a dozen
concert recitals later, at the age of only 8, Bedrosian would win the gold medal at the
same competition against competitors raging from the ages of 5-19 years old. In the
years ahead until he was 18, Bedrosian would play in dozens more Classical Concert
Recitals amongst his peers playing pieces by composers such as Khatchaturian, Bartok,
Beethoven, Sanucci, Bach, Tcherepnin, Grieg, Vandall, and many more. Danny’s
interests in jazz and R&B began at the age of 10 amidst his classical studies as well, as
he played keyboards and sang in various local Latin, Metal, and Hip Hop Groups.

The first group he fronted won a local battle of the bands, and sparked Bedrosian to
consider a deeper move into the industry. Since the age of 11, Bedrosian had been
moved more by the P-Funk than any other group, and aspired himself to start what
would eventually be the 18-piece New England based, super-funk group Sweet Motha’
Child. From 1998-2003 Bedrosian was the Band Director, Keyboardist, Lead Vocalist,
Arranger, Manager, Booking Agent, Frontman, Lyricist, and chief songwriter of the
successful group. Under his reigns, Sweet Motha Child would release six albums, and
Bedrosian’s production company handled album production and release for various
projects in the New England region. He also played in other groups, worked two jobs,
and was attending The University of NH, becoming, of all things, a Historian of Middle
Eastern Studies.

Between the ages of 16 and 20, Bedrosian met and befriended his longtime musical
favorites in George Clinton & Parliament-Funkadelic. Upon these meetings, Bedrosian
would go to FL for a week to do session work for Clinton. He would be asked to do the
same for Bo Diddley months later, but Bedrosian, driven by the need to finish what he
started both financially and educationally decided to graduate college first. Upon
receiving his degree at the age of 22, and now a certified Historian of Middle Eastern
Studies, Bedrosian left the leadership of SMC with his sister Elise, and moved to
Tallahassee, FL in an attempt to land a full-time job with the P. He and keyboardist
Jerome Rodgers worked diligently for months with bands and in the studio, and
Rodgers landed Bedrosian a job as keyboard tech for George’s keyboardists.

Within months, Bedrosian was brought into the fold as full time musician in the band,
and has played all over North America, The Caribbean, Europe, Australia and New
Zealand with P-funk. He is now featured on a handful of Live Pfunk releases, Pfunk
albums and spinoff albums. His credits include Executive Producer for Jerome
Rodger’s debut album, and appearances on the BET 25th Anniversary Spectacular, The
Tonight Show with Jay Leno, and Last Call with Carson Daly. Bedrosian also has played
keyboards for Pfunk offshoot bands such as The 420 Funk Mob, Divadelic & COP, Drugs,
Cacophonic FM, GCIII Varsity Squad, and The Church of High Voltage.

He released his debut solo album in September of 2005, and has received great
reviews from the world over. Aside from the recent release, Bedrosian is currently
CEO, Producer & Engineer of his Production and Publishing Company BOZFONK, is
working with other artists ‘ projects, both in and outside of Pfunk, is the current
keyboard player for Tallahassee funk act the Soular System, and is writing an historical
ethnology of Ancient Tribal Armenia. At 25, Bedrosian continues to win new fans as well
as respect in the world of music.

Danny continued to score with multiple releases on his BOZFONK MOOSICK production
and publishing label, in conjunction with WEFUNK South, which Bedrosian also is head
of operations. Albums by Som’n Fierce, MoonChild, Secret Army, The Soular System,
Asphalt Panda, Teresa Jimenez, Clonin the Wheel and Sweet Motha’ Child have come
out on through Bedrosian’s work with these two aforementioned companies between
2005 and 2009.

Aside from administrative duties, Bedrosian continues to stay busy, currently playing in
10 bands live, and working on 10-15 different studio projects fiscally. In October of
2008 Danny played keys for the special George Clinton and the Gangsters of Love
Halloween performance featuring RZA on the Late Show with David Letterman. Danny
also performed with George Clinton, P-Funk, and Sly Stone at one of the inaugural balls
in Washington DC for President Barack Obama.

In 2009 Danny Bedrosian’s Secret Army opened for George Clinton and Parliament-
Funkadelic, with Danny handling double duty in cities from Boston to Orlando. Danny
also expanded BOZFONK MOOSICK and WEFUNK SOUTH in the beggining of 09, by
working with more new and established artists and bands than ever before.

Danny toured South America with George Clinton and P-Funk in 2009 as well, making his
way onto CNN South America and every South American newspaper due to the hype of
the band coming down there. He also established important ties with associates in
Buenos Aires.

Less than a month later, Danny also played the island of Le Reunion with P-Funk, in the
middle of the Indian Ocean; He also played multiple solos with the group at the Tokyo
Jazz Festival in front of 85,000 people in Japan. He also had his debut tour with his
band Secret ARmy up and down the east coast of the United States. At the request of
the modern American scholar, academic Cornell West, Danny was among the members
of the P-Funk along with George Clinton of course, to perform on the Mo’nique show on
BET later that year. It was among the band’s best performances of recent years.

In 2011, at the repeated request of the academician Dr. West, Bedrosian joined Clinton
for a third appearance beside the esteemed professor and author on the Late Late
show with Craig Ferguson. The appearance commenced with 6 weeks of heavy touring
in Japan and the United States, followed by upcoming return trips to South America and
Europe, culminating in Bedrosian’s longest consecutive tour with P-Funk yet, clocking
in over three months, and four continents, and about 11 nations in that time period.

His production work likewise has expanded to over a dozen artists, bands and groups
for Bozfonk Moosick alone. New albums produced by Bedrosian came out left and right
quite recently, from Natalie Scott in Colorado, and John Deming in NYC, with
productions in New Zealand, Russia, the U.S. and the U.K. rounding out the constant
work. His clients include Travel Channel’s Ghost Adventures television star Nick Groff,
who grew up with Danny, and the two of them conceptualized an album of high acclaim
and sales, including a spot on the Ghost Adventures show itself in a 2012 special
episode.

Danny’s music world appears to just keep growing and growing, and only keeps getting
better.