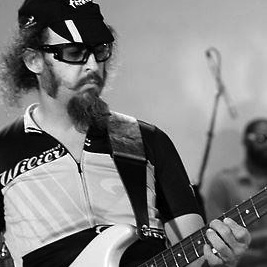 Chris “Citrus” Sauthoff began playing the violin in the fourth grade, quickly taking control of the instrument to become the first-chair violinist in his grammar, as well as junior high school, orchestras. However, he left the instrument in the 7th grade, and it wasn’t until he reached the age of 15 that he picked up a guitar. Again, with amazing quickness, he grasped the instrument and was the en

vy of the high school guitarists. His main influences at the time were Stevie Ray Vaughn, Jimi Hendrix, Eddie Hazel, Michael Hampton, Garry Shider and Blackbyrd McKnight.He attended Gustavus Adolphus College in Minnesota in 1988 as a guitar performance major. After a year of being the only “long hair” in the school and being placed on academic probation, he decided to leave, but was asked to stay and teach music appreciation. He realized, though, that he would learn much more in the school of life, and decided to head back to Colorado and follow his dream of being a professional musician.

Citrus played in many local bands in the early ’90s, among them Red Moon Storm, Human Head Transplant, The Three Hip Horns, The Wild Angels, and the Stone Koolies, in which he played guitar and/or bass. He made a name for himself in Denver as a professional with a good work ethic. With a flair for performance, he incorporated light shows and dancers in the burgeoning underground music scene of the times, commandeering abandoned warehouses in the now-gentrified LoDo district, and putting on incredible events.

In 1990, he met with his first master musician and mentor, D.N. Shukla from Ghorakhpur, India. Mr. Shukla began training Citrus in the art of Hindustani Classical music on the sitar. Citrus studied ardently from the Pundit, playing the guitar as his teacher played the sitar, and in the process, he actually developed a method of stringing an electric guitar to sound very much like a sitar.

Mr. Shukla gave Citrus insightful lessons on two separate trips to Colorado from his native India, and after the second session had ended, he simply smiled and told Citrus that it was his turn to travel next and go to India. He went to India twice, for six-month intervals, to study sitar in the Hindu Classical method.

In 1994, Citrus joined Lord of Word and the Disciples of Bass. It was at this audition that he was dubbed “Citrus” by the leader and head rapper of the band, Theo, who said his playing “sounded juicy.” Quickly becoming one of the key members and writers of the group, he worked on their first self-titled album.

The Lord of Word ultimately became the best of the best in Denver for hip-hop as well as R&B and funk, performing in venues like the Ford Amphitheatre in Vail, the renowned Red Rocks Amphitheater in Golden, and Spring Break in Lake Havasu, Arizona. They also opened at First Avenue and Glam Slam in Minnesota for none other than Bootsy Collins. It was during this time in 1995 that he met his idols, George Clinton and the P-Funk Allstars.

Apparently they saw something in him, for as The Lord of Word began to break apart with personal issues, P-Funk took him out on the road at the age of 25, just ten years after picking up his first guitar. Technically he was a part of the road crew as the stage manager, but he also got to play nightly in the group.

For the next decade, he traveled the world with P-Funk, playing at the most prestigious venues and festivals, from The Montreax Jazz Festival, to the Fuji Rock Fest in Japan, as well as the legendary Apollo Theater. As a result, he’s shared the stage with acts such as James Brown, The Cult, REO Speedwagon, the Doobie Brothers, Kid Rock, Joss Stone, Macy Gray, Maceo Parker, Outkast, Foxy Brown, Cyprus Hill, Erykah Badu, Ike Turner, Mahavishu and countless others.

Citrus has also played with the 420 Funk Mob, Drugs, T.H.C. Mercenaries, Varsity Squad, Sativa Clinton’s Blaze Band and many other offshoot bands that periodically opened for George Clinton. He recorded anonymously on George Clinton’s album T.A.P.O.A.F.O.M., and has some great video and musical moments on the recently released DVD and CD, George Clinton and Parliament/Funkadelic Live at Montreaux.

He also performed sitar for P-Funk vocalist Kim Manning’s Love and Light Initiation CD, and was chosen by George Clinton to be guitarist for the Children of Production, a band built to showcase the talents of Kendra Foster and Sativa Clinton. Children of Production are now on a hiatus…trying to deal with the Mothership blues.

Ultimately Citrus just wasn’t satisfied playing the same three-song, one-hour-plus set inside of P-Funk night after night. With no extra pay or recognition for his efforts, Citrus found he could hardly pay the rent. He decided to take flight on his own, beginning his new project, U.S. Pipe. With this band, Citrus managed to again open for P-Funk as well as play in his favorite Colorado venues and beyond, stretching the Pipe as far as other mountain region states and the Midwest.

Their debut CD, United Sound Pipe, was released at the end of 2008 and garnered much critical acclaim. The release party at Denver’s Bluebird Theater the following February was a huge success. However, the burdens of running such a large project from the business side to the music side had taken a toll over the years and the wormhole closed in April, 2009.

Citrus continues to work as a professional musician in the Front Range area. Currently he’s working on a blues project with Clay Kirkland and has made some appearances with the Rowdy Shadehouse Funk Band. He also plays solo, alternating from guitar to sitar and across several genres and styles of music he’s learned from others as well as written himself.

He is also on faculty at the esteemed nonprofit organization, Swallow Hill Music Association, in South Denver. Citrus’ guitar skills run across the board, being both an avid acoustic and electric guitarist. His lessons are full of practice habits and techniques as well as music theory and mental control. At Swallow Hill, he teaches everything from Core Guitar classes to specialty workshops such as Acoustic Zeppelin and Texas and Chicago Blues, as well as private lessons.