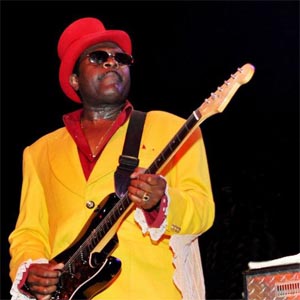 Andre Foxxe was a gifted child musician who found his way into the Parliament/Funkadelic camp while still a teenager, forming the band Trey-
Lewds Flastic Brain Flam with Tracey Lewis, George Clinton’s son. That began a long association during which Andre would perform with the P-Funk
All Stars, and Jimmy G. and the Tackheads.

The Incorporated Thang Band launched in 1986, a group comprised with P-Funk members such as Lige Curry. Andre was a key member signed to Warner Brothers Records, and his first solo project the “A. Foxxe Jam” was released on the Don Davis label I.T.M.

This talented Singer/Song Writer and Producer has collaborated with a wide variety of artists in every capacity over the years. A list of International
superstars that have included, Red Hot Chili Peppers, Too Short, Phillipe Wynne, Amp Fiddler, Legendary Tony Allen and over forty different albums
with George Clinton’s Parliafunkadelicment Thang.

No stranger to Movie and Television production the “Foxxman” has worked on tracks for the award winning Tracy Ullman Show and The Simpson’s album as well as written and produced songs for the House Party and Good Burger soundtracks. Andre made appearances in the movie PCU, the Fox TV show New York Undercover, The Grammys, various television shows and videos by Hip/Hop artist Too Short and the legendary P-Funk.