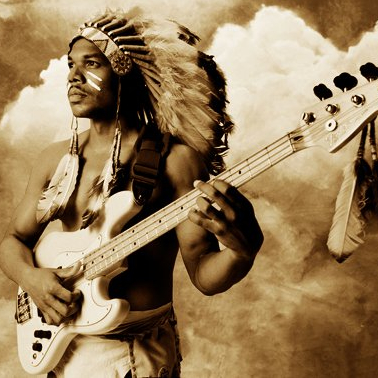 Jeff “Cherokee” Bunn is an American Bassist, best known for his work with The Brides of Dr. Funkenstein, produced by George Clinton.
A Haliwa-Saponi Native American Tribal Member, and U.S. Air Force Veteran,  Bunn began working with Clinton’s Parliament-Funkadelic Thang Inc. music conglomerate in the fall of 1978 as the principle bassist for the company’s most recent act, “The Brides of Funkenstein,” in support of their “Funk or Walk” album during the Funkadelic’s “One Nation Under A Groove” tour and continued in this position for the Parliament-Funkadelic “Aqua Boogie” and Gloryhallastoopid tours and Bride’s subsequent album, “Never Buy Texas From A Cowboy”.

After serving two years in Clinton’s “Uncle Jam’s Army”, Bunn served four years in Uncle Sam’s Air Force before returning as a P-Funk All-star in 1992; subsequently supporting Praxis (Jerome “Bigfoot” Brailey, Bernie Worrell and Buckethead), and Jerome’s Mutiny CD “Aftershock 2005.”  Bunn continues to serve as “on call” bassist for George Clinton as well as sharing the bass chair at Second Baptist Church in Richmond, VA for the past seven years.