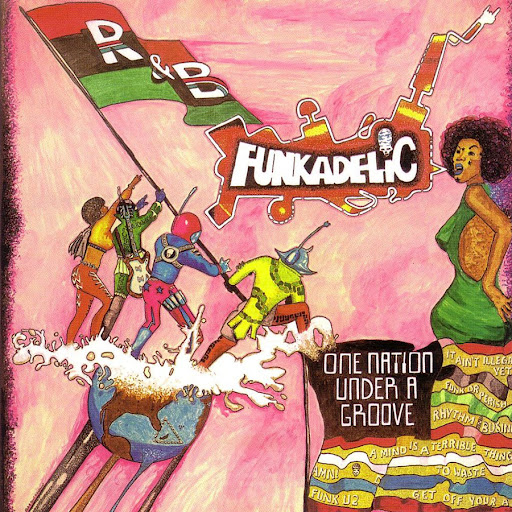 One Nation Under a Groove is the tenth studio album by American funk and rock band Funkadelic, released in September 1978 on Warner Bros. Records. Recording sessions took place at United Sound Studio in Detroit, Michigan, with one song recorded live on April 15, 1978 at the Monroe Civic Center in Monroe, Louisiana. The album was the first album to include keyboardist and frequent songwriter Walter “Junie” Morrison. One Nation Under a Groove also marked the pinnacle of Michael Hampton’s development as a guitarist.

One Nation Under a Groove was Funkadelic’s most commercially successful album, and one of its most critically lauded. It is also regarded by many as the greatest funk album of all time and ranks at or near the top of many “best album” lists in disparate genres. The album was later featured on Vibe magazine’s 100 Essential Albums of the 20th Century list. In 2003, the album was ranked number 177 on Rolling Stone magazine’s list of the 500 greatest albums of all time.

One Nation Under a Groove is a very loose concept album (as are most of Funkadelic’s works), essentially declaring the power of Funk (see P Funk mythology) to do two interconnected things: become an open-minded, happy, and goal-oriented person, and dance well. This is the power of Funk stated in less clear terms on previous albums (Free Your Mind… And Your Ass Will Follow).
(Source : wikipedia)