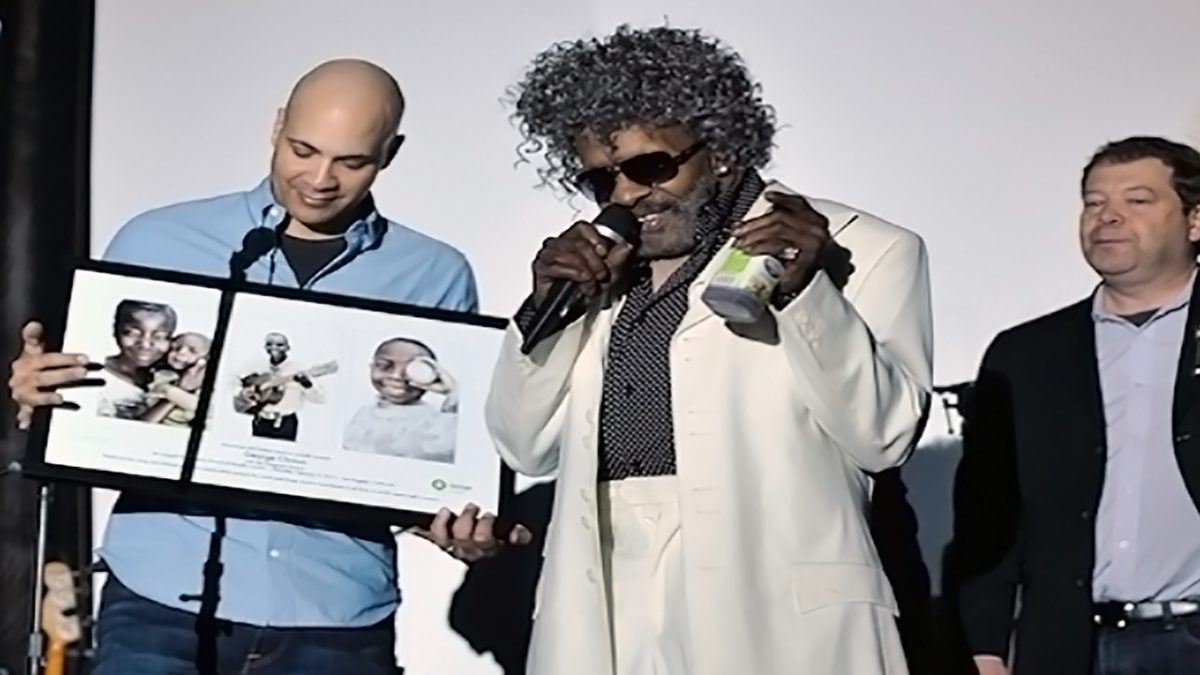 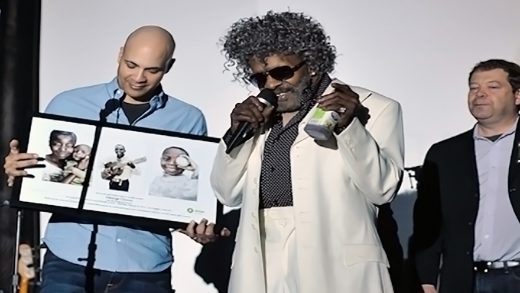 Originally appeared at via Billboard.biz:

The legendary musician Sly Stone (center), made a rare appearance at the 5th Annual MojaMoja Brunch and Benefit Concert for Oxfam America during Grammy weekend. MojaMoja host Garth Trinidad (left), and Bob Ferguson (right), Oxfam America’s Manager of Creative Alliances & Music Outreach presented the Vanguard Award to him. Stone accepted the award on behalf of the honoree George Clinton, who could not attend the event due to severe storms in the NorthEast. (Photo: Wendy Le)

The MojaMoja Pre-Grammy Brunch and Benefit Concert celebrated its fifth anniversary with an eclectic lineup and a totally unexpected appearance this year.

While event producer Ramona Wright noted that “every year we get a surprise visit,” few were probably expecting reclusive soul icon Sly Stone, who got onstage to accept the Vanguard Award in the stead of legendary Parliament-Funkadelic founder George Clinton, who was being honored at the event but couldn’t appear due to being grounded in Newark thanks to the blizzard blanketing the Northeast.

“I’m happy for George,” said the famously enigmatic Stone in his brief appearance onstage, distinctive with his white outfit and trademark outrageous hair, before — just as characteristically — he disappeared into the wings. It was a classic MojaMoja moment — music business as unusual, celebrating artists from different generations on the same stage, doing their own thing.

Conceived by event producer Wright, MoMoja CEO Oscar Merino, and KCRW DJ Garth Trinidad (the station is an official media sponsor for the event as well), the mission “is to expose new music integrated with existing iconic artists, taking advantage of the talent converging on L.A. during Grammy Week,” Merino said. “Garth’s ears are crucial in terms of curating that talent.”

This year’s brunch featured a similarly iconoclastic balance. One up-and-comer featured was multi-genre artist Chloe Flower — a pianist who fuses lyrical classical melodies with hip-hop beats, and has worked with Nas, Swizz Beats, and Celine Dion; Flower is in L.A. to work on her solo debut produced by Babyface, featuring guest spots by Boyz II Men and Deepak Chopra.

The other end of the spectrum was represented by William Hart of legendary R&B group the Delfonics, famed for hits like “Didn’t I (Blow Your Mind This Time”), “La-La (Means I Love You)” and “Ready or Not Here I Come (Can’t Hide from Love)” — the latter famously interpolated into a hip-hop smash by The Fugees. Hart was performing at MojaMoja with a revisited Delfonics lineup, promoting an upcoming album set for release on hipster label Wax Poetics in March.

“I’m getting a vibe here that’s like a whole new start to my career,” Hart says. “I’ve met ten different radio personalities and DJs here. The younger generation seems to have taken to me: it reminds me of the time when I got my first Grammy, for ‘Didn’t I (Blow Your Mind This Time).’”

Adrian Miller, co-manager of Chloe Flower, stated “We’re huge fans of Garth’s, so when he invited us, we of course embraced that. It’s maintaining a great relationship.” Miller’s sentiments were echoed by Sarah Chambliss, U.S. label manager of the pioneering electronica label Ninja Tune, was there accompanying one of the imprint’s premier artists, the U.K. singer-songwriter Fink, a recent transplant to L.A. to record his upcoming new album and jumpstart his co-songwriting career.

“It’s amazing how influential KCRW is, in a city where everyone’s a music supervisor, they’re like the greatest music supervisor of all,” says Fink. “It’s amazing — we’ve gotten film licenses just from film directors hearing my song on KCRW during their drive home. Also, it’s for a great cause: Oxfam has an immense reputation in the U.K., and it’s great to get it better known in the States.”

Indeed, the charity aspect to the event remains a crucial part of its appeal. “I work as an anti-human trafficking activist, and we depend on Oxfam,” says Flower. “This is a perfect event for me.” In addition to Oxfam, 2013’s MojaMoja happening also built awareness and funds for the Darfur Stoves Project, supporting work in the ongoing African tragedy zone. “We started the brunch because there was a tremendous opportunity for artists coming in for the Grammys to give back,” says Wright. “We wanted to create a party with a purpose.”

“The charity aspect is extremely important,” says Trinidad. “I couldn’t do something like this without trying to help somebody.”

Likewise, music-rights lobbying and royalty collection organization SoundExchange was a co-sponsor of the event. “It’s about having a presence as we continue to play a bigger and bigger role in getting artists paid fairly,” says SoundExchange president Michael Huppe. “We lobby on Capitol Hill, and we’re hear during Grammy week.”

“It’s great outreach,” adds Sean Glover, SoundExchange’s Manager of Artist and Label Relations. “We can catch someone here before they’re on the cover of Billboard, or win their first Grammy.”