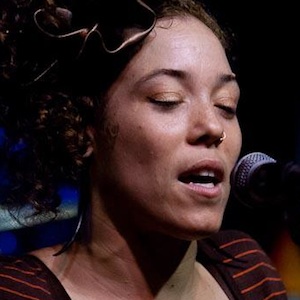 Kendra Foster was born in Tallahassee, FL where she decided to attend college at Florida A&M University. Like many, she started singing in church, but her career began while at F. A. M. U.
While still a freshman at F. A. M. U., Kendra met Whitney Russell, trumpet/keys player, after “sittin’ in” with his jazz combo at a local coffeehouse. Kendra had already developed an interest in jazz in high-school, learning jazz standards and studying Sarah Vaughan, Dinah Washington, Nancy Wilson, and Ella Fitzgerald. After hearing Kendra sing, Whitney immediately made her his protege. He simultaneously introduced her to his cohort, Michael Patterson, primarily an amazing funk musician. Mike P (as he is better known) invited Kendra to join his band, Smoke, performing their originals and Parliament/Funkadelic covers (Mike being a P-Funk fanatic). Also, with an 11-year background in ballet, Kendra had already began her schooling becoming a member of Orchesis Contemporary Dance Theatre at F.A.M.U. and took part in the Urban Bush Women Institute learning and performing mostly African diasporal dances and modern technique. Subsequent to Smoke, mentor, Whitney Russell, formed the fusion-styled group, Fish -N- Grits, and made Kendra the lead vocalist.
As Fish -N- Grits gained more local acclaim and Smoke began their hiatus, Kendra decided to change her major from Math/Chemistry to Jazz Studies/Commercial Music and joined F.A.M.U. ‘s jazz big band. Meanwhile, Mike P discovered that George Clinton, mastermind behind Parliament/Funkadelic, established a studio in Tallahassee, FL and acquired an engineering job at Clinton’s studio.
Though they gained much local notoriety, Fish -N- Grits disbanded. Meanwhile, Mike P was working more regularly at George Clinton’s studio, and decided to bring Kendra into the fold. Kendra began recording at the studio minimally, making herself available for any possibility of music making-often between classes and work, wading through homework while waiting on an opportunity to “hit the mic”. In parallel motion, she met outstanding musicians in the music department at school, such as Robin and Rachel Phillips of Lotus. Kendra and Lotus became vocalists for a neo-soul band composed of other extraordinary music students, Concept. With numerous gigs and a flood of school work, Kendra was still creating music in George Clinton’s studio every chance given.
After 1-2 years, the substantial amount of material Kendra recorded finally caught Clinton’s attention, and he signed her to a production deal and asked her to join Parliament/Funkadelic on the road. Leaving school and Tallahassee behind, she continued the creation of her album, “Myriadmorphonicbiocorpomelodicrealityshapeshifter”, and joined the legacy of Parliament/Funkadelic.
On the road, she befriended and began to work very closely with Sativa (Shonda Clinton) and they created Children of Production along with the other younger members of PFunk–Danny Bedrosian, Rico Lewis, New Jeruz (Jason Drennan), Steve Boyd, Young Heff (Stephen Boyd, Jr), Citrus (Chris Sauthoff) also often featuring the great Garry Shider and Blackbyrd McKnight. Longing for the fulfillment of her initial goal to present her own musical creations and visions to the world, Kendra began to refocus on her solo career and joined forces with all her favorite producer friends: Kelvin Wooten, Keinan Roland (Rastafunk), and Mike P. She has been collaborating with them and many other great musicians/producers, creating a collection of atleast 50 songs, planning for the right time to share them with the world. Her style encompasses her many varied influences ranging from Belita Woods of Brainstorm, Sarah Vaughn, & Chaka Khan to Bjork and Sade. Her integrated sound (though she has several musical personalities) is a soul based fusion adding everything she can throw in the pot: jazz, funk, hip hop, rock, classical, world, electronica, gospel, etc. She also graces other artists’ albums with her songwriting skills. She wrote lyrics and melodies for “A Warning For The Heart” on Sunshine Anderson’s “The Sun Shines Again”, “Glass Mountain Trust” on Mark Ronson’s “Record Collection”, “U Can Depend On Me” and “Trust In Yourself”, on PFunk Allstars’ “How Late Do U Have 2BB4UR Absent”, and “Stillness In Motion” on George Clinton’s “Gangsters of Love”. Kendra is currently working on a solo project with the extraordinary producer/writer/musician, Kelvin Wooten. She has also realized another one of her biggest dreams–she is currently touring with the incomparable icon, D’Angelo. She deems music her purpose, and approaches her music as an unassuming, multi-dimensional, progressive ministry…