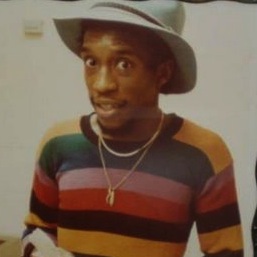 Glen Lamont Goins (January 2, 1954 – July 29, 1978)
Born and raised in Plainfield, New Jersey in a family of talented musicians, this master vocalist with the strong, haunting and powerful gospel voice is perhaps best known for “calling in the Mothership” in the P Funk live shows, such as on the renowned P Funk Earth Tour.
Goins was particularly prominent on the Parliament albums Mothership Connection (1975), The Clones of Dr. Funkenstein (1976), and Funkentelechy vs. the Placebo Syndrome (1977), and played on the Funkadelic albums of this period as well.
In 1977, Goins was one of the first of many musicians to leave Parliament-Funkadelic in reaction to what was perceived as very bad management by band leader George Clinton. He formed his own funk band Quazar in 1978, featuring his younger brother Kevin Goins and drummer Jerome “Bigfoot” Brailey.
Glen Goins died from Hodgkin’s lymphoma, aged 24, in 1978