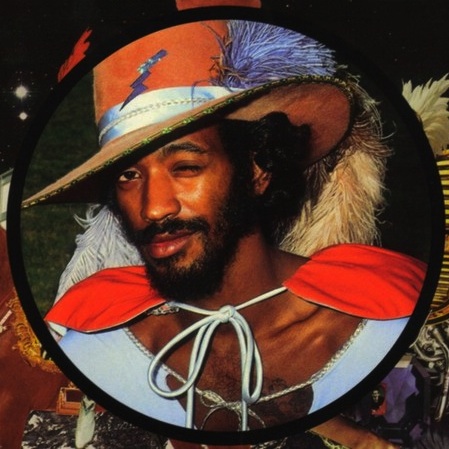 Edward Earl Hazel (April 10, 1950 – December 23, 1992)
While there have been more technically flashy players in the ranks of the P-Funk guitar army, Eddie Hazel is considered by most (including this writer) to be the greatest guitarist to be involved with the Funk Mob. Why? because of his unique ability to turn a funk tune on its head, always playing beautifully emotional yet unexpected patterns that challenged all sense of normality.

Born on April 10, 1950 in Brooklyn, he grew up in Plainfield, New Jersey where he sang in church before joining local R&B band the Boyce Brothers. He taught himself how to play after his brother bought him a guitar for Christmas while his family was still living in Brooklyn.

His mother, Grace Cook, moved the family to Plainfield (although she continued to work in Brooklyn) because she felt that Brooklyn was becoming an unsafe place to raise her family. Ironically, Plainfield was also the home of a vortex of drug-infested housing projects from the clutches of which few of its citizens (including Eddie) have been able to escape.

It was in Plainfield that Eddie forged his lifetime friendship with Billy ‘Bass’ Nelson, Funkadelic’s original bassist. Nelson says “Eddie and I automatically had a sound together. He taught me everything I know about music; we had such a tight connection it goes beyond words. I can’t tell you how much it hurts that he’s not here anymore. I’ve played with some true guitar greats over the years, but nobody had anything on Eddie”.

Billy encouraged Eddie to join Funkadelic in 1969 eventually getting Funkadelic leader George Clinton to persuade Eddie’s mother to allow him to join the group and tour. Funkadelic‘s self-titled debut album was released on Westbound records in early 1970 and featured Eddie’s playing on songs such as “I’ll Bet Ya” and “Qualify & Satisfy”. Eddie’s unique fusion of blues, acid rock and funk is all over this album.

Eddie is also heavily featured on Funkadelic’s 1971 album Free Your Mind and Your Ass Will Follow. The title track features Eddie in wicked form that is continued throughout the album. However, it was the 1971 album Maggot Brain which proved to be Eddie’s tour de force.

They played “Maggot Brain” at Eddie Hazel’s funeral on New Years Eve 1992 in Plainfield, New Jersey. It was a fitting farewell to a true guitar hero. More than any other song in the P-Funk arsenal, the stirring minor-key anthem will forever be associated with Eddie Hazel.

The song was created when George Clinton asked Eddie to think of the saddest thing he could possibly think of (his mother dying) and play it through his guitar. The resulting one take, 10 minute long solo guitar piece is, in my opinion, the greatest piece of electric guitar ever recorded. Eddie takes the listener through every emotion known from fear to lust, pleasure to pain, serenity to anger, love to hate and turns them into one of the most tear jerkin and gut wrenching performances on tape.

Eddie’s influence began to dwindle form this point within Funkadelic due to excessive drug and alcohol problems and financial disputes with Clinton. He was sent to Lampoc Prison after a teeth assault on a plane where allegedly he bit an air hostess when he was high on Angel Dust. However he returned with bang for the 1974 album Standing on the Verge of Getting it On. He co-wrote every song on the album (songwriter’s credits are given to his mother Grace Cook) and is in fine form on the guitar.

Eddie left P-Funk in 1974 to work as a Motown guitarist/composer, most notably playing on the Temptations’ albums (A Song For You, 1975, and Wings of Love, 1976) and serving as musical director for Bonnie Pointer and Chairmen Of The Board before returning to the P-Funk Mothership in the early 80’s. However, he did release a solo album,Game, Dames & Guitar Thangs, in ’78 on Atlantic records that featured the entire P-Funk Mob. It remains out of print and is a highly sought-after collector’s item.

Penniless and homeless the last year of his life, Eddie moved back to his mother’s Plainfield home. He had been suffering from chronic stomach problems for years, and finally he succumbed to internal bleeding and liver failure on December 23, 1992.

Ironically, he had recently begun planning several projects, including a power trio date with former Band of Gypsys members Billy Cox and Buddy Miles, as well as an original Funkadelic reunion.

With his virtuosity laughing in the face of oppression as well as convention Eddie Hazel set the standard for all, not just black guitarists to follow.

Often compared to the great Jimi Hendrix, Eddie never received the same level of fame and public admiration as Jimi sometimes suffering the same stigma as other great black guitarists such as Ernie Isley and being flagged as a mere Hendrix wannabe. As he told Guitar Player magazine, “I listened to Jimi a lot. It was very uncanny that our styles were alike, but that is what I was hearing inside. I wanted to make the guitar an extension of my singing. My style is really like solo vocalist guitar.”

Despite the environment he grew up in, it is my belief that like many true people gifted with true genius Eddie’s personality contained an element of self-destruction. This story is true of so many truly brilliant performers such as Jimi himself, SRV, Jim Morrison and so many more. It is almost like a denial of their own talents.

Similarly the mark of true genius was stamped all over Eddie’s playing by its inconsistency. Like all true greats the level of ambition and invention in his playing had varied results. Playing with that level of intensity produced moments of pure untouchable genius at the same time some music perfectionists are sometimes turned off by the ‘bum’ notes of all the greats like Jimi and Eddie. Perhaps what these people fail to realize is that playing on the edge is what sets these people apart. Innovation involves taking risks. Technical competence has little to do with emotion and fire when playing an instrument. Eddie played and sang with such emotion that he was often ridiculed by other members of the mob for crying whilst performing in the studio.