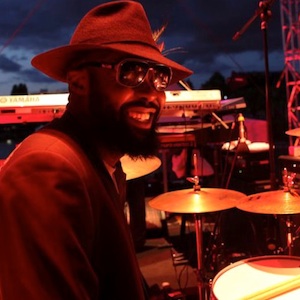 “If there was ever a question if a young musician could effectively and effortlessly play true, authentic funk as well as embody the finesse of a seasoned jazz swing, drummer Benzel Baltimore puts the question to rest by doing just that. Held by Bootsy Collins as a baby, the Baltimore native got his first taste of drumming at the age of 2, and has been gigging as professional musician since the age of 15. As the son of the legendary trumpet player Bennie “The General” Cowan, Benzel was bred into funk music so there was no doubt that he was destined for greatness.

Benzel Baltimore studied early with the likes of Dave Weckl, Steve Smith, Pat Patrillo and Horacio Hernandez, which has made him the versatile drummer he is today. He caught the attention of world famous drummer Dennis Chambers so much that he took Benzel under his wing and became his mentor.

Many people describe Benzel as the “young guy with an old soul” and “the positive, energetic personality wearing the big smile behind the kit” on and off stage. His energy on stage and his electrifying performances and improvisational drum solos landed him a coveted spot as the drummer for George Clinton and Parliament Funkadelic. Other credits include the Rock and Roll Hall of Fame, Woodstock 99, Jazz in Vienne, and the Essence Festival. As well as playing on the same bill as many legends such as Meshell N’Degeocello, Sheila E, Melanie Fiona, Robert Glasper, Robbie Coltrane and Pat Metheney.”