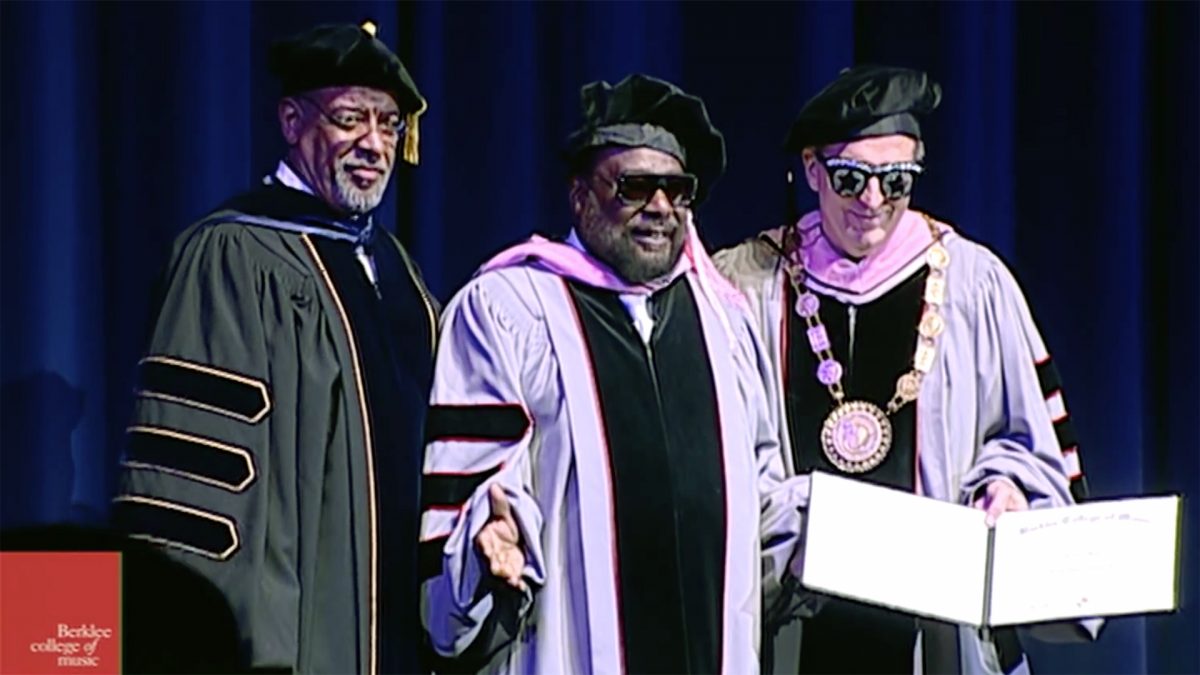 George Clinton crashed a Berklee P-Funk Ensemble rehearsal for an MTV special a few years ago. Next month, he returns to the college to teach a four-day residency, perform a concert, and accept an honorary degree.

At the concert, February 16, Berklee President Roger H. Brown will present Clinton with an honorary doctor of music degree in recognition for the funk icon’s enduring musical and cultural contributions. Featuring performances of “I Wanna Testify,” an early career doo-wop hit, “Mothership Connection,” and other P-Funk classics, the concert will pay tribute to Clinton’s musical legacy. February 13–16, Clinton will visit classes, interact with students, and rehearse with the Berklee P-Funk Ensemble. Clinton’s longtime horn section players, Greg Thomas and Bennie Cowan, will perform with him at the concert.

About George Clinton George Clinton is one of the foremost innovators of funk music, and was the mastermind behind the bands Parliament and Funkadelic. Clinton was inducted into the Rock and Roll Hall of Fame in 1997 with 15 other members of Parliament-Funkadelic.

Clinton started his career with the Parliaments, a barbershop doo-wop ensemble, which scored a major hit with “I Wanna Testify” in 1967. Clinton then began experimenting with harmonies, melody, and rhythm, and taking cues from the psychedelic movement, forever setting himself apart from the Motown era.

By the early 1970s, the group’s tight songs evolved into sprawling jams around funky rhythms. They dropped the “s” from the band name and Parliament was born. Around the same time, Clinton spawned Funkadelic, a rock group which fused psychedelic guitar distortion, bizarre sound effects, and cosmological rants with danceable beats and booming bass lines. Funkadelic recorded a number of influential concept albums, including Free Your Mind and Your Ass Will Follow, Maggot Brain, and America Eats Its Young.

In the 1980s, Clinton emerged as a successful solo artist. He released Computer Games with the No. 1 hit single “Atomic Dog,” produced the Red Hot Chili Peppers’ pioneering Freaky Styley, and signed with Prince’s Paisley Park label. He also began to experiment with the urban hip-hop music scene, as a generation of rappers reared on P-Funk began to name-check him.

Clinton has become recognized as the godfather of modern urban music. Beats, loops, and samples of P-Funk have appeared on albums by OutKast, Dr. Dre, Snoop Dogg, Busta Rhymes, Missy Elliot, De La Soul, Fishbone, and many others. As Clinton has said, “funk is the DNA of hip-hop and rap.” In 1996, Clinton released the solo album The Awesome Power of a Fully Operational Mothership, which reunited him with Bernie Worrell and Bootsy Collins.

Over the past decade, Clinton has continued to play sold-out shows across the globe, while a countless number of his songs have been licensed for film and television. Currently, he is compiling new and old songs for an exclusive online-only release, fighting for artist rights through the P-Funk Initiative (a bill drafted with Congressman John Conyers Jr. to protect against copyright and royalty theft), and blogging about these issues on his website, FunkProbosci.com. Clinton also continues to support the youth through the Mother’s Hip Education Foundation, and through donations to the Barack Obama Green Charter High School in Plainfield, New Jersey.