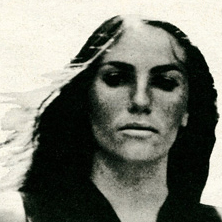 Ruth Copeland was born in Consett, County Durham, in the north-east of England. She initially pursued her music career as a blues and folk singer, but she gained her first break after her marriage to Motown producer Jeffrey Bowen. When Holland, Dozier and Holland created Invictus Records, Bowen began producing records for the label, and Copeland became one of the label’s first white performers, as a member of the newly signed group New Play. Copeland was involved in writing material for the group, but New Play was not successful, and soon disbanded

Work with George Clinton
At the same time as Copeland’s involvement with Invictus, George Clinton’s Parliament was also signed to the label. She became involved with work on the group’s debut album, Osmium, co-producing the record with Clinton and writing two of the album’s tracks: ‘Little Old Country Boy’ and ‘The Silent Boatman’. These tracks are unusual in Parliament-Funkadelic’s catalogue, and show the influence of Copeland’s interest in country and British folk music.
Following the release of Osmium in 1970, Copeland continued to collaborate with Clinton, co-writing a further two singles for Parliament, ‘Come In Out of the Rain’ and ‘Breakdown’, which were released between 1971-1972.
The year 1972 also saw Copeland contribute to the self-titled album released by The Politicians featuring McKinley Jackson. She co-wrote the album’s opening track, ‘Psycha-Soula-Funkadelic’, a track subsequently sampled by Brighton-based band The Go! Team, on their 2007 album Proof of Youth.

Solo career
Alongside her work on Parliament’s debut, Copeland also began working on solo material, and her first album Self Portrait was released by Invictus in October 1970. The album featured contributions not only from George Clinton, but from a range of other Parliament-Funkadelic musicians, including Bernie Worrell, Eddie Hazel, Tawl Ross, Billy Bass Nelson and Tiki Fulwood.
A second album, I Am What I Am, was released in July 1971, again featuring a range of P-Funk musicians, including several (such as Hazel and Nelson) who had recently left Funkadelic due to financial concerns. These former Funkadelic musicians remained with Copeland as her backing band when she toured to promote her album.
Copeland was unable to sustain the success of her initial albums and tours. Despite releasing a third album entitled Take Me To Baltimore on RCA Records in 1976, she failed to repeat the popularity of her initial releases.