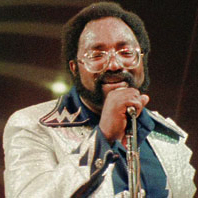 Born in Detroit, Michigan, and raised in Cincinnati, Ohio, Wynne began his musical career as a gospel singer. He soon switched to R&B and attained some measure of success, singing with Bootsy Collins’s Pacemakers in 1968 and with James Brown’s J.B.’s shortly thereafter. Wynne then spent time in Germany as the lead singer of the Afro Kings, a band from Liberia, before he replaced his cousin, G. C. Cameron, as one of the lead vocalists for The Spinners. He sang with the group until 1977, during which they achieved several successful albums and singles.
Wynne then launched a solo career with Alan Thicke as his manager. His first album Starting All Over was released on the Cotillion label in 1977 but was not promoted. His fortunes turned upwards again when he joined George Clinton’s Parliament-Funkadelic in 1979. He performed with them on several recordings, and was a featured vocalist on the Funkadelic single “(Not Just) Knee Deep” (a #1 hit on the Billboard R&B chart). While associated with Parliament-Funkadelic, Wynne also appeared on the Bootsy Collins album Sweat Band. Wynne released the solo album Wynne Jammin’ in 1980, and made a guest appearance on the song “Something Inside My Head” by Gene Dunlap, and in the song “Whip It” by the Treacherous Three. Wynne’s final album was the self-titled Philippé Wynne, released by Sugar Hill Records in 1984.
On July 13, 1984, while performing at Ivey’s nightclub in Oakland, California, Wynne suffered a heart attack and died the following morning.