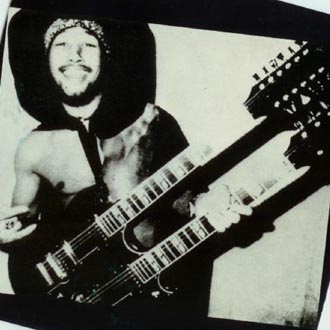 Hampton started his professional career when he was recruited as a seventeen-year-old guitar prodigy by Funkadelic, which found itself in need of a lead guitarist after original guitarist Eddie Hazel left the band. Hampton impressed Funkadelic’s George Clinton by performing a note-for-note rendition of Hazel’s ten-minute solo “Maggot Brain”. He made his debut with the band’s album Let’s Take It to the Stage in 1975, which is dominated by his guitar. Hampton’s playing included fuzzy, Hendrix-inspired licks and wailing harmonics. Due to his young age, Hampton was nicknamed ‘Kidd Funkadelic’.
Hampton became a fixture in Funkadelic, and he continued his role as lead guitarist even during Hazel’s sporadic returns to the band. Hampton’s performances of “Maggot Brain” — which had become more improvised — became regular features of live Parliament-Funkadelic shows, and the song became his signature concert performance. The bonus-EP of Funkadelic’s One Nation Under a Groove (1978) included a live version of the song featuring Hampton. The 12″ single version of the title track was the first notable Funkadelic song to feature Mike Hampton on lead guitar. One of his most celebrated performances is the lead guitar solo on the Funkadelic hit single “(Not Just) Knee Deep” from 1979, as well the title track to the Brides Of Funkenstein’s second album Never Buy Texas From A Cowboy.
In 1981 Clinton was forced to disband the P-Funk musical empire due to financial and legal difficulties. In 1993, he performed on the album Under the 6 with Slavemaster. Hampton performed on the albums released under Clinton’s name, which featured many other P-Funk mainstays as well, and he became a member of the P-Funk All-Stars. In 1998, he released his first solo album entitled Heavy Metal Funkason through the P-Vine label in Japan