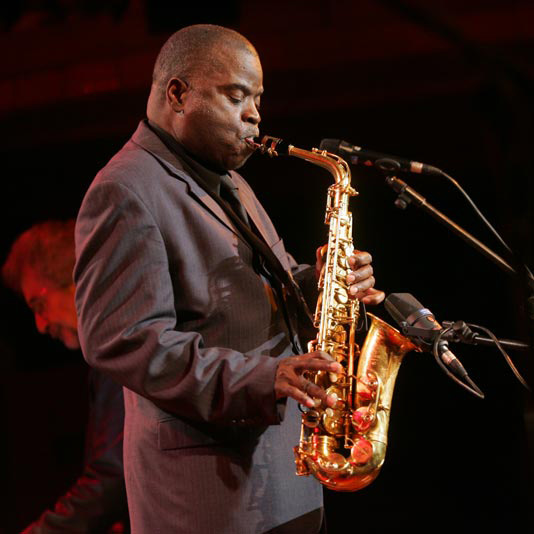 Maceo Parker: his name is synonymous with Funky Music, his pedigree impeccable; his band: the tightest little funk orchestra on earth.

It’s fairly common knowledge that Maceo has played with each and every leader of funk, his start with James Brown, which Maceo describes as “like being at University”; jumping aboard the Mothership with George Clinton; and his ongoing part in Prince’s tours. He’s the living, breathing pulse which connects the history of Funk in one golden thread. The cipher which unravels dance music down to its core.

“Everything’s coming up Maceo,” concluded DownBeat Magazine in a 1991 article at the beginning of Maceo Parker’s solo career. At the time Maceo was a remembered by aficionados of funk music as sideman; appreciated mainly by those in the know. For the last two decades Maceo Parker has been enjoying a blistering solo career, building a new funk empire; one that is both fresh and stylistically diverse. He navigates deftly between James Brown’s 1960’s soul and George Clinton’s 1970’s freaky funk while exploring mellower jazz and the grooves of hip-hop.

His collaborations over the years have included Ray Charles, Ani Difranco, James Taylor, De La Soul, Dave Matthews Band and the Red Hot Chilli Peppers. His timeless sound has garnered him a fresh young fan base.

It is almost impossible to separate which came first, Maceo or the funk. The amazing P-funk Parker has been at it with his legendary sound for time that dates back to the 1960’s. That’s when Maceo and his drummer brother Melvin climbed on board the James Brown funky soul funk train. It wasn’t long before James coined the solo summoning signature, “Maceo, I want you to Blow!”. To most musicologists it’s the musically fertile group of men from this period of James Brown’s band who are recognized as the early pioneers of the modern funk and hip-hop whose sounds we still jump to in the present day.

Maceo grew to become the lynch-pin of the James Brown enclave for the best part of two decades. – his signature style helped define James’ brand of funk, and the phrase: “Maceo, I want you to Blow!” passed into the language. He’s still the most sampled musician around simply because of the unique quality of his sound. There would be other projects and short hiatuses during his on-off time with The Godfather, including a brief spell overseas when he was drafted, and in 1970 when he left to form Maceo and All the Kings Men with some fellow James Brown band members (the two albums from this period are on a constant reissue cycle even some thirty years later.)

It was Maceo’s Uncle the front man for a local band; the Blue Notes, who was Maceo’s first musical mentor. The three Parker brothers (Maceo, Melvin and trombonist Kellis- later to become Professor of Entertainment law at Columbia University) who formed the “Junior Blue Notes.”. When Maceo reached the sixth grade the Junior Blue Notes were brought by their Uncle perform in between sets at his nightclub engagements. It was Maceo’s first experience of the stage and one that started his love affair with performing an love which has increased rather than diminished with time.

Maceo grew up admiring saxophonists such as David “Fathead” Newman, Hank Crawford, Cannonball Adderley and King Curtis. “I was crazy about Ray Charles and all his band, and of course particularly the horn players”. By the age of 15, Maceo had forged his own style on the tenor sax. “I thought about ‘Maceo Parker plays Charlie Parker’, and then I thought how about ‘Maceo Parker plays Maceo Parker’, what would it be like to have young sax players listening to me and emulating my style of playing”. Thus the “Maceo sound” we know so well was born.

In the mid ’70’s Maceo hooked up with George Clinton, and the various incarnations of Funkadelic, Parliament and Bootsy Collins. He now had worked with the figure heads of Funk music at the height of their success. From the breathtaking shows of James Brown to the landing of the Mothership, Maceo has been there: as close as it gets to some of the most exciting moments in musical history, delivering his sound as a constant point of reference.

In 1990 the opportunity came for Maceo to concentrate on his own projects. He released two successful solo albums: Roots Revisited (which spent 10 weeks at the top of Billboard’s Jazz Charts in 1990) and Mo’ Roots (1991. But it was his third solo album, Maceo’s ground breaking CD Life on Planet Groove, recorded live in 1992 which soon became a funk fan favorite. Planet Groove also served as a calling card, boosting Maceo’s contemporary career as a solo artist for a college aged audience, and bringing into being his catch phrase “2% Jazz, 98% Funky Stuff.”

And so began Maceo’s relentless headlining touring. Bringing his top notch, road-tight band and superlong shows to people all over the world. “I feel it’s my duty as an artist to go as many places as I can, especially if the people want it.” says soft spoken North Carolina native. He doesn’t come out on stage in a diaper or a velvet swirling cape, no giant spaceships or 50 person entourages, nothing except the core of his musical soul which he lays open every time he blows his horn.

Since 1999 Maceo has participated in some of Prince’s groundbreaking tours when not on the road with his own group, and continues to do so as a special guest when his own schedule allows.

Maceo’s albums Funk Overload, Dial M-A-C-E-O and Made by Maceo entered the top 40 in the European charts upon release. Dial M-A-C-E-O features guest spots from the Mistress of folk music Ani DiFranco, Prince, and a quite different James from the one we have come to associate with Maceo: James Taylor, while School’s In from 2005 is about as Funky as a studio album can be.

At the beginning of 2007 Maceo had a chance to fulfill one of his dreams: working with a Big Band. With Grammy Award Winners the WDR Big Band from Cologne Germany, he broadcast and performed a live series of shows paying tribute to Ray Charles and released the album Roots and Grooves, a live recording taken from these shows which also features Dennis Chambers and Rodney “Skeet” Curtis. The album received huge critical acclaim, and Maceo has followed up with a recording to be released in 2012: Soul Classics. Along with WDR Big Band the album features drummer Cora Dunham Coleman and bassist Christian Mcbride.

In July of 2012 Maceo was presentedwith Les Victoires du Jazz in Paris: a Lifetime Achievement Award for his contribution to music. The same weekend he was presented with an Icon Award at the North Sea Jazz Festival in Rotterdam, with the following inscription :

“Maceo Parker, a music-maker and world-class performer for almost fifty years, distinguishes himself through exceptional musicality and craftsmanship. The inspired and indefatigable saxophonist has made an indelible mark on soul, funk and jazz.
The unique sound of James Brown owes a sizable debt to the talent and inspiration of Maceo Parker, and Brown recognized it openly. Parker’s name found its way into Brown’s lyrics: “Maceo, blow your horn!” Prince also tips his hat to Parker referring to him as ‘The Teacher’.
Maceo Parker has not only made an incredible amount of music, he has put his signature on a huge variety of musical genres. Through his partnership with soul and jazz artists like James Brown, George Clinton en Bootsy Collins as well as pop formations like Living Colour, Bryan Ferry, The Red Hot Chili Peppers and The Dave Matthews Band, Maceo Parker has entertained a wide audience with his unique saxophone sound. Parker’s music is a major source of inspiration in the hip hop world. He is one of the most sampled musicians in the world.
Maceo Parker’s music integrates a range of genres from soul, funk and jazz to rhythm and blues while maintaining respect for tradition. As saxophonist, singer, composer and band leader, Maceo Parker has distinguished himself through a wide array of projects, CDs, concerts and international festivals. Parker regularly performs with Prince, often accompanied by Candy Dulfer. He is at his best on stage, where he shows his boundless energy and passion and his ability to captivate audiences with his sound.
All the qualities of an icon unite in Maceo Parker, and the jury is proud to present him with the 2012 Radio 6 Icon Award.”