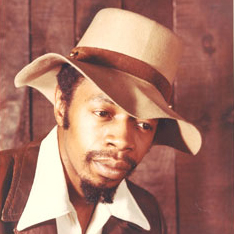 Several of Motown’s biggest hits — “Ask the Lonely,” “Dancing in the Street” “I’ll Keep Holding,” and “Can You Jerk Like Me” — were co-written by George Ivy Hunter aka Ivy Jo. A private person, little is known about the mysterious but prolific Motown songwriter/producer/singer. He was raised in Detroit, MI and his musical gifts showed early, in elementary school he played with the Detroit Symphony and the Detroit City Orchestra, excelling on the trumpet, the Euphonia, and keyboards. He attended Cass Technical High School where he took tough courses like economics, and at 15 wrote his first song for a group called the Velveteers which helped them win an amateur contest.

After high school he joined the Army. When his duty was over, he returned home seeking work, and decided to become a singer. And sing he did, first at the 20 Grand, then at Phelp’s Lounge where he befriended Motown writer/producer Hank Cosby, who directed the talented young man to Motown’s A&R Director, William “Mickey” Stevenson. Hunter auditioned as a singer who wrote his own songs, but Mickey saw potential in Ivy Jo as a co-writer. He played on quite a few sessions before Earl Van Dyke took over on keyboards. His first collaboration with Stevenson was “Sweet Thing” by the Spinners; the two went on to write classic after classic, but never got the attention that other Motown writers and producers received. For the Temptations Ivy contributed to “Born to Love,” “Just Another Lonely Night,” “Sorry Is a Sorry Word,” and “It’s a Lonely World Without Your Love.” the Spinners benefited from “I’ll Always Love You,” and “Truly Yours”; he penned “You” for Marvin Gaye, “Yesterday Dreams” (the Four Tops), “Danger Heartbreak Dead Ahead” (the Marvelettes), “My Baby Loves Me” (Martha & the Vandellas), and “Got to Have You Back” (the Isley Brothers)

All the while Hunter was cutting solo tracks at Motown, but they never released anything until “I Remember You (Dedicated to Beverly)” b/w “Sorry Is a Sorry Word” in March of 1970. A second 45, “I Still Love You” b/w “I Can Feel the Pain,” surfaced two months later, neither did anything. Motown released Ivy Jo Is in This Bag on its VIP label the same year.

Hunter got around, he contributed to a multitude of projects around the Motor City; he even played keyboards on Funkadelic’s “Mommy, What’s a Funkadelic?” He co-produced a sizzling album for Wee Gee (William Howard) the then-ex-lead singer of the Dramatics; contributing the classic “Hold on to Your Dreams,” later done by the Staple Singers, and the soulful “You’ve Been a Part Of Me.” Other Hunter compositions include “Loving Country” (the Supremes), “Loving You Is Sweeter Than Ever” (the Four Tops), and “Seek and You Shall Find” (the Isley Brothers, Marvin Gaye); he also collaborated with Ian Levine on “Footsteps Keep Following Me,” by Frances Nero.