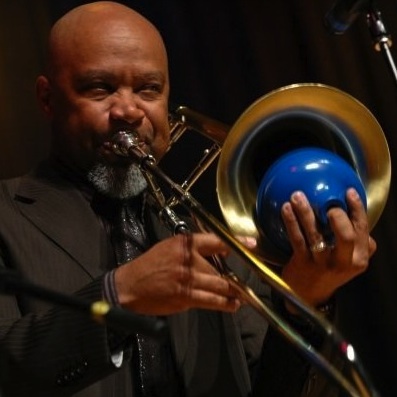 Greg Boyer, born on September 25th, 1958 in Washington, DC, grew up in Bryans Road, Maryland. He was formally introduced to music when he took up alto sax in the school band at ten. By the time he reached high school, he had taught himself to play every instrument in the school band, plus guitar, bass & piano; even writing and arranging for various projects.
He got his first gig playing tenor sax with the Chosen Few at fifteen and played trombone & tuba in the St.Mary’s College jazz orchestra at sixteen, where he would meet future P-Funk Horn section members Bennie Cowan and Scott Taylor. Scott stayed to earn his degree, while Greg and Bennie took the renegade path, dropping out of school in ’77 to pursue their music careers.
After hooking up with saxophonist Greg Thomas a month later, they were invited by R. “Skeet” Curtis to audition for the soon-to-be vacant horn section spot for Parliament. As luck would have it, two months after leaving campus with no definite plans, the three would become the P-Funk Horns, where Boyer would remain for the next 19 years as trombonist.
He, along with his fellow P-Funk Horn section-mates, would tour with and record on various P-Funk projects. Boyer also appeared on several outside projects with the P-Funk Horns under the name the Baltimore Connection. Some of these include albums with Stanley Clarke, Al Green, go-go godfather Chuck Brown & the Soul Searchers (This is a Journey Into Time, 1993, Minor Music), reggae dancehall queen Patra (Queen of the Pack, 1993, Sony; Scent of Attraction, 1995, Sony) gospel great Richard Smallwood (Testimony, 1992, SPD; Portrait, 1989, Word), Stanley Clarke (Time Exposure, 1984, Epic), Crystal Waters (Storyteller, 1994, Mercury) and others.
Boyer was known on stage, during his tenure as a P-Funk All-Star, for his trademark stage acrobatics and cycling gear, and equally important, his broad musical base. Along with his searing, jazz influenced, quote-laced and sometimes humourous solos, he also gained a reputation as a master horn arranger, helping to tailor the distinctive sound of the P-Funk Horns.
After leaving the group at the end of ’96, due to creative and managerial differences, he took a sabatical from the rigors of the road, to spend some time with his family. Then he got a call from Maceo Parker (James Brown’s JBs, Parliament-Funkadelic’s Horny Horns) to join his group in ’98, where his musical prowess is helping to hold down the funk with the legendary saxophonist.
He is Currently, trombonist and band leader with Prince’s NPG Band.