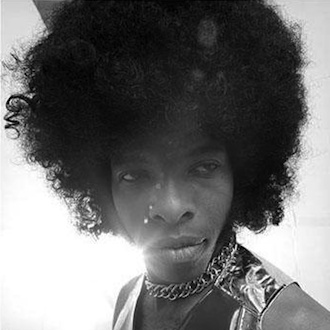 Born Sylvester Stewart on March 15th, 1944 in Texas, his family relocated to San Francisco in the 1950’s. Music came early to Sylvester, who at age four, recorded his first song as a gospel singer with his nuclear family group, “the Stewart Four”. By 1952, The Stewart Four had recorded a song called “On The Battlefield”, with Sylvester singing lead. The family took the record on the road and promoted it as far as Texas. It was during this time period, around the fifth grade, that Syl was given his nickname. In a school spelling bee, one of his classmates accidentally inverted the “y” and the “l”. Syl became Sly. The kids teased and the name stuck.

By the time he reached high school in Vallejo, California, Sly was playing rock ‘n’ roll with Joey Piazza and the Continentals. In 1961, he joined a group called The Viscaynes who had a regional hit called “Yellow Moon”.

Sly’s knowledge of music and his charming personality led to disc jockey positions at R&B stations KDIA and KSOL, where his shows were popular enough land him a job as a producer for Autumn Records.

Already a multi-instrumentalist, Sly quickly added experience as a producer to his resume after hooking up with another dj and future alternative rock radio pioneer, Tom “Big Daddy” Donahue. Sly’s credits at Donahue’s Autumn Records included several early San Francisco Sound tracks: the Beau Brummels’ “Laugh, Laugh” and “Just A Little” and “Somebody to Love” as performed by the Great Society. Sly’s offer to sit in on the latter was turned down and the song did not become a hit until it was reworked a couple of years later by the Jefferson Airplane with Grace Slick on vocals.

After the rejection by “The Great Society”, he decided to change his stage name to “Stone” and make his own music. After a couple of false starts, Sly recruited trumpeter Cynthia Robinson, sax-player Jerry Martini, his sister, pianist Rosie Stewart, along with his brother, guitarist Freddie Stewart, drummer Greg Errico and most importantly, bassist Larry Graham.

Not only did they sound different, they looked it too, as the only band of the era to include blacks and whites, males and females. The Family Stone’s diverse racial makeup unwrapped the hidden fact that soul music was often a synthesis created by both black and white musicians. Perhaps even more radical was the crucial role women played as instrumentalists, rather than just vocal wallpaper to round out the band’s sound.

After paying its dues in the suburbs, the band released their first album in 1967. As the title of it says, Sly and the Family Stone were indeed “A Whole New Thing”. Their fusion of the head-trip effects of psychedelic rock with the pulse of dance music had an audacity that seems commonplace now. Their first great moment was the 1968 single “Dance to the Music”, which made its way into the top ten on the nation’s music charts.

All the while the group’s outlandish live performances featured choreographed onstage movements and fantastic hairdos and costumes which appealed to a rock audience, despite the grab bag of musical sources. The message of their next single made it #1 for a month. The catchphrase from “Everyday People” – ‘different strokes for different folks’, was a popular saying throughout the late sixties.

Radio stations mostly stayed clear of the band’s next single release “Don’t Call Me Nigger, Whitey”. It was the first evidence of Sly’s dark humour as the title phrase was endlessly repeated over a gloomy funk vamp. Their following single, “Hot Fun in the Summertime”, while superficially breezier, was an ironic commentary on America’s long, hot summer of racial unrest. “Hot Fun” reached #2 on the American charts as almost nobody got the joke.

In 1969, the band released their breakthrough album “Stand,” and spent the majority of the year touring, turning in a historic performance at Woodstock and galvanizing audiences across the country with their innovative mix of soul, funk, R&B, rock, psychedelia, and pop.

Sly’s image appeal helped to bring black youth over to rock, and may have encouraged black militants to try and make him an agent of their cause. Under their pressure and internal group friction, Sly began to exhibit signs of a bleeding ulcer and sought relief through drugs. After developing a reputation for missed and delayed concerts, a comeback with another number one hit, “Thank You (Falettin Me Be Mice Elf Agin)” in 1970 seemed to indicate a return to form.

During this period, Sly was feeling intense pressure from his record company to keep putting out new material, getting muscled by black nationalist leaders to make his music more radical, receiving death threats, failing to show up for concerts and wrestling with cocaine addiction. The album “There’s a Riot Goin'” on finally came out in 1971, preceded by the wonderful cool funk of the hit single “Family Affair”. The album was ravaged by fallout: from cocaine, from the 60s, from the failure of black nationalism, from the bloatedness of the counterculture and from being a superstar. Sly became more overindulgent in drugs, making records at less frequent intervals.

Larry Graham quit the group in 1972 to form “Graham Central Station” and in 1980, he hit the charts again with a beautiful ballad called “One In A Million You”.

Sly released two more records, “Fresh” (1973) and “Small Talk” (1974) with mostly different line-ups. After that, the quality of his output diminished in direct relation to his increasing drug addiction and egomania. Sly and the Family Stone no longer had the drawing power to be a headlining road show, but singer Bobby Womack felt it necessary to help Sly into drug treatment, afterwards honouring his mentor by taking him on tour.

With the exception of his appearance on Funkadelic’s “The Electric Spanking of War Babies” (1981), the rest of Sly’s career has been a series of drug nightmares, half-hearted releases and idiotic marketing schemes like 1979’s “Ten Years Too Soon”, a pathetic disco remix album of his 60s hits. In 1982, he released a mostly ignored album called “Ain’t But the One Way” and wasn’t heard from again until he appeared on the 1986 soundtrack to the film Soul Man.

On January 12th, 1993, all of the original members of Sly & the Family Stone appeared together to receive an award marking their induction into the Rock and Roll Hall of Fame. They were inducted along with music legends like Cream, Creedence Clearwater Revival and The Doors. After being introduced by P-Funk leader George Clinton, all of the members except Sly walked onto the stage. Larry then led all members in vocal renditions of “Thank You (Falettinme Be Mice Elf Agin)” and “Dance to the Music” after which the six members of the Family Stone made short, thankful speeches. Just when it seemed as though Sly was not going to appear, he stepped onto the stage accompanied by a standing ovation. He made a hasty speech, uttered the words “See you soon” and left the podium.

Rumours of isolation and eccentricity have followed Sly’s legend over the years. He lived reclusively in Los Angeles, and reports of his mental and physical health were generally not encouraging, though his musical legacy lived on through his classic and influential recordings.

In June, 2003, The Family Stone re-united to go back to the recording studio. Missing though was Sly, who was still inactive in the music business due to the drug-related, legal and medical problems which have haunted him over the years. Also absent from the line-up was bassist Larry Graham. The seeds of the reunion were planted 18 months before, after the Family Stone gathered in New York to accept an R&B Foundation Pioneer Award. The original band members that appear on a new 16 song album are Sly’s brother Freddie Stone, sister Rosie Stone along with drummer Greg Errico, Jerry Martini on saxophone and Cynthia Robinson on trumpet.

Sly Stone made his first major public appearance since his 1993 induction into the Rock and Roll Hall of Fame at the Grammy Awards in Los Angeles on Febrary 8th, 2006. Sly and the Family Stone were the subject of a multi-artist tribute during the telecast, for which Stone joined in during the final number, “I Want To Take You Higher”. Boasting a huge platinum mohawk, dark sunglasses and a floor-length metallic coat, the 61 year old Stone took his place at a synthesizer in the middle of the stage, but only occasionally sang into the microphone and left before the song was finished, but not before flashing a brief smile.

Not much was heard from Sly until January 2010, when he filed a $50 million lawsuit against his former manager. The suit claimed that tens of millions of dollars in royalties were kept from the singer who says he now depends on Social Security to survive. Sly was back in the news again in April of 2011 when he was arrested for possession of cocaine rocks after Los Angeles police pulled over his live-in van for a minor traffic violation.

The 68-year-old Stewart released a new album on Cleopatra Records called “I’m Back! Family & Friends” on August 16th, 2011. It marked his first album in almost 30 years. In late September of that year, the press reported that Sly was suffering from financial problems, having been forced to leave his Beverly Hills mansion and was living out of a camper van. Sly was quoted by the New York Post as saying “I like my small camper. I just do not want to return to a fixed home. I cannot stand being in one place. I must keep moving.” He apparently parks his van on a residential street in the rough Los Angeles neighbourhood of Crenshaw where a retired couple provides him with a warm meal and a shower each day.