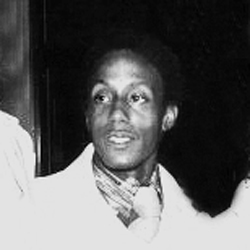 Steve “The Fearless Leader” Washington was a key figure in Aurra’s formation and direction. Steve was born in Newark and raised in East Orange, New Jersey. At fifteen, he toured with his uncle Ralph “Pee Wee” Middlebrooks of the Ohio Players during school vacations and had a band of his own with East Orange high-school buddies Mark Hicks and Tim Dozier called Black Satin Soul. When Black Satin Soul eventually fused with the Young Mystics (Floyd Miller, Mark Adams and Tom Lockett), Slave emerged. “The members of Aurra was an ever changing thing,”