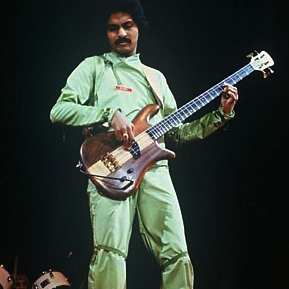 Born in Bombay, India, John was a student at the Cathedral and John Connon School, enrolling at the age of four in 1951. He migrated to Toronto in 1960.
John’s first musical influences were in India, both in the Indian music he heard in Bombay and Western classical music, such as that of J.S. Bach, W. A. Mozart, and Charles Wesley, which he heard both in his Protestant church and in school. On coming to Canada, he came into contact with African American music which then became his primary influence.
John started playing bass at the age of 17. His first high school band was named The Questions. John quickly moved on to his first paying gig with a ‘Beatle’ band called The Bounders, which was renamed The Press Gang in 1965. The following year John formed his first R&B group, The Trikq, which served as the rhythm section for John’s next collaboration in 1967 with George Olliver & The Soul Children. John completed his first recording with The Majestics, a local nightclub band. In 1969, John joined Bush. Bush, the successor to Canadian band Mandala, was largely the brainchild of two Canadians, drummer Pentti ‘Whitey’ Glan and guitarist Domenic Troiano; although Bush only lasted a year and a half, its influence among rock musicians was significant.
After two albums with Bush, the second released under Troiano’s name as a debut album, John became a respected player in the Los Angeles scene, playing with Edgar Winter and Rick Derringer of (White Trash) as well as Bobby Whitlock (Derek & the Dominos). At the same time, John was active as a teacher; among his pupils were Nick St. Nicholas (Steppenwolf), Kenny Gradney (Delaney & Bonnie and Little Feat), and Rosemary Butler (Birtha).
John was recruited in 1971 by George Clinton to work with Parliament/Funkadelic on the albums Chocolate City and America Eats Its Young while sharing bass playing duties with Bootsy Collins on tour. He later appeared on several rock albums and tours of the 1970s such as Lou Reed’s Rock n Roll Animal, Lou Reed Live and Sally Can’t Dance, as well as Alice Cooper’s Welcome to My Nightmare, The Alice Cooper Show, Lace and Whiskey, and Dada.
John left mainstream rock in 1979, returning to Toronto to found his second R&B band, The Lincolns, one of the last bands now remaining which represent the Toronto Sound of the late 1960s. Wayne Gretzky chose The Lincolns to play at his 1988 wedding in Edmonton. The Lincolns remain active throughout Canada, and have released two albums, Take One and Funky Funky Funky.
As a solo artist, John has worked with James Brown, Paul Shaffer, The Blues Brothers, Pinetop Perkins, Jr. Wells and Mike Bloomfield in addition to Rory Block and Canadian songwriter Murray McLauchlan. John appeared in the film Blues Brothers 2000.
John was inducted into the Rock and Roll Hall of Fame in 1997 as a member of Parliament/Funkadelic.