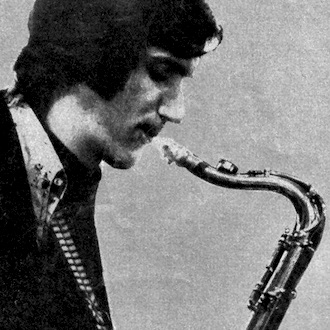 Born into a musical household in 1949, Michael Brecker’s father—a lawyer
and jazz pianist—played jazz on the record player for his young sons and
took Michael and older brother Randy to see Miles Davis, Thelonious Monk
and Duke Ellington perform live. While Randy took up trumpet, Michael
launched his studies on clarinet and then alto sax. Moved by the genius of
John Coltrane, Brecker switched to tenor sax in high school. After
studying at the University of Indiana, as did his brother, Brecker moved
to New York City, landing work with several bands before co-founding the
pioneering jazz-rock group Dreams in 1970. Three years later, Brecker
joined his brother in the frontline of pianist/composer Horace Silver’s
quintet. The following year, the siblings branched off to form the Brecker
Brothers—one of the most innovative and successful jazz-funk fusion
bands of the decade.
The brothers owned the popular downtown Manhattan jazz club, Seventh
Avenue South, where jam sessions with keyboardist/vibes player Mike
Mainieri, bassist Eddie Gomez and drummer Steve Gadd led to the 1979
formation of Steps Ahead. With Peter Erskine later replacing Gadd, the
all-star quartet recorded seven albums.
In the ’70s and ’80s Brecker recorded and performed with a virtual Who’s
Who of jazz and pop giants, including Eric Clapton, Herbie Hancock, Chick
Corea, Aerosmith, Chet Baker, George Benson, Quincy Jones, Charles
Mingus, Joni Mitchell, Jaco Pastorius, Paul Simon, Frank Sinatra, McCoy
Tyner, Bruce Springsteen, Steely Dan, Pat Metheny and Frank Zappa.
Brecker cut his first record as a leader in 1987. That solo debut, Michael
Brecker, was voted “Jazz Album of the Year” in both Downbeat and Jazziz
magazines. The follow-up recording, Don’t Try This At Home, garnered
Brecker his first Grammy. After investigating new rhythmic concepts on
1990’s Now You See It… Now You Don’t, and subsequently being a featured
soloist for a year and a half with Paul Simon, Brecker reunited with his
brother for 1992’s Return of the Brecker Brothers. The Breckers’ Out of the Loop
(1994) and Michael’s Tales From the Hudson (1997) put additional Grammys
on the saxophonist’s shelf, leading to Brecker being named “Best Soloist
of the Year” by JazzLife and “Jazz Man of the Year” by Swing Journal. Around
the same time, Brecker appeared on Herbie Hancock’s The New Standard and
McCoy Tyner’s Infinity, followed by extensive touring with each piano titan.
Following Two Blocks from the Edge (1998) and Time Is of the Essence (1999) was
Brecker’s Nearness of You: The Ballad Book, which featured a dream ensemble
of fellow jazz giants—Pat Metheny, Herbie Hancock, Charlie Haden and
Jack DeJohnette—who never before recorded an album together.
Produced by Metheny, with James Taylor on two tracks, Nearness of You was
named “Record of the Year” and Brecker was named “Artist of the Year”
in both the Critics’ and Readers’ Polls of Japan’s Swing Journal—which has
the largest circulation of any jazz magazine in the world.
In June 2002, Brecker, Hancock and trumpeter Roy Hargrove released
Directions in Music, a live concert at Toronto’s Massey Hall which celebrated
the music of Miles Davis and John Coltrane. Brecker began 2003 by
creating a large ensemble record, Wide Angles, which featured Brecker’s 15-
piece quindectet. Wide Angles appeared on dozens of “Best Jazz Recordings
of the Year” lists and also won two Grammys.
In August 2004, Brecker was in a great deal of pain during a performance
at the Mount Fuji Jazz Festival. Following an initial diagnosis of a cracked
vertebra, Brecker was subsequently diagnosed with the bone marrow
disorder myelodysplastic syndrome (MDS). Despite an exhaustive search
for a matching bone donor (during which tens of thousands of new bone
marrow donors registered at Brecker-sponsored donor drives throughout
the world) and an experimental blood stem cell transplant, Brecker
passed away from leukemia on January 13, 2007.
Although he was extremely ill at the time, Brecker was able to complete a
final album before he died. Pilgrimage, his first recording consisting entirely
of his original compositions—with Herbie Hancock, Brad Mehldau, Pat
Metheny, John Patitucci and Jack DeJohnette—received stellar reviews
upon its release in May 2007.
More than a dozen lives have been saved so far as a result of Breckerinspired
blood stem cell donors—and his professional accomplishments
assure Brecker being forever intertwined with the history of music. Said
Jazziz magazine: “You’ll find no better example of stylistic evolution than
Michael Brecker, inarguably the most influential tenor stylist of the past
25 years.”