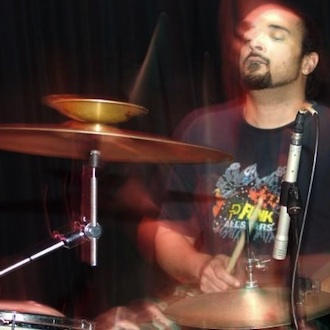 Gabriel Gonzalez was born on February 17 in New York City. A year later moved back to Detroit with his family where he grew up in a very musical household.It started in 1985 with his first professional recording session & gigs for some local Gospel Artist. Dr.LaQuint Weaver & The Moss Brothers (JMoss). During that time he was also in the Mumford High Scool Jazz band for a few years performing around the city and for the Mayor.

Having met George Clinton at the impressionable age of nine because of his father who owned a barbershop, cut “MOONS & STARS” in his head in the early 70’s. This led back to a young Gonzalez meeting up again with George Clinton 8 years later at legendary studio UNITED SOUND a home base for P-FUNK & many legendary artist from John Lee Hooker to the Zapp.

Core mebers of P-Funk would eventually rehearse in his grandmothers basement sometimes during layovers in DETROIT. This is where he got a chance to study P-Funk’s craft from greats like Billy Bass Nelson,Eddie Hazel,Garry Shider, Blackbyrd McKnight, & Michael “Clip” Payne who has greatfully had me in half a dozen bands with him.

The group was so impressed with the youngster that they decided to have Dr.Funkenstein let him officailly TOUR the World with the band on February 18,1995 one day after his 26th Birthday! “I was the youngest member of the band at that time and took on the moniker from highschool as “the Undi$co Kidd” for my knowledge of P-FUNK Music” said Gonzalez.

By 1990 Gabe Gonzalez founded his own group known as Enemy Squad which has released a number of “COLLECTIBLE” and “RARE” Out of Print C.D.’s and LP’s. Enemy Squad played Lollapalooza,with Bad Brains on their Re-Union Tour, Rage Agianst The Machine, Black Eyed Peas, Ernie Isley, Morris Day & the Time just to name a few. He was Inducted into HOLLYWOOD Guitar Center’s ROCK WALK with the P-FUNK ALLSTARS on November 21,1996!

A few days later he left the band to pursue his own career with his own band and other Projects such as H.R. (Bad Brains Frontman), Ultra Unit feat Amp Fiddler & local Hip Hop Artist, with Jaun Atkins and some of Derrick May’s Techno Artist, The Process & Bernie Worrell’s group the WOO WARRIORS for five years whom he performed with at WOODSTOCK ’99! Gabe Gonzalez recently WON “FUNK ARTIST of the YEAR” at the D.B.M.A’s & Outstanding Electronic/ Dance / Writer / PRODUCER at the 2012 Detroit Music Awards. He has also been working with Legendary Hip Hop Artist K-SOLO,BUSHWICK BILL, AWESOME DRE’ as Produecr/ Music Director and just signed on with ANTI AUTHORITY’s LABEL TEAM. AS Gabe Gonzalez see’s it EDUCATION is KNOWLEDGE,KNOWLEDGE IS POWER,& LEARNING IS A CONTINUOUS JORNEY WELL EARNED