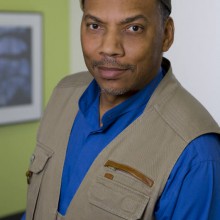 But the way Jones describes himself back then during our telephone conversation — “a straight-laced, conservative military brat” who wore ties every day — it’s hard to picture him colluding with Dr. Funkenstein to create some of the most controversial album covers in music history. One of the most unforgettable, Uncle Jam Wants You, features a joint-toting Clinton in military garb and patent leather boots in an obvious caricature of a famous photo of Black Panther